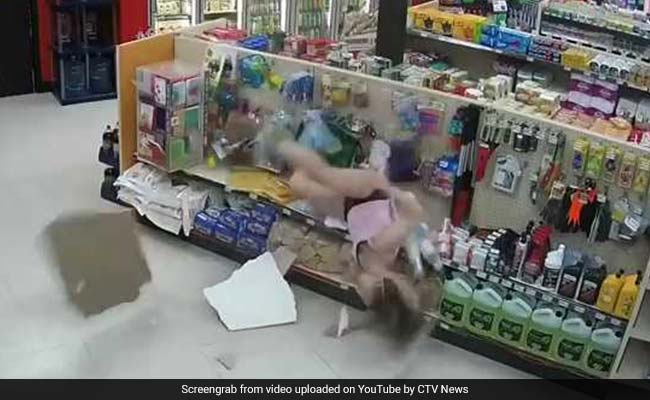 The female suspect comes crashing spectacularly through the ceiling.

Like a Charlie Chaplin film, modern-day surveillance videos can unspool a story without making a sound.

And in the case of an attempted criminal activity at a convenience store in Canada, footage from that incident tells . . . quite the tale.

The bare facts of the case, as laid out by the Royal Canadian Mounted Police, are as follows: On Monday afternoon, the owners of the Spruce Grove Reddi Mart in Alberta called police after encountering a couple who had apparently tried to use stolen credit cards.

An officer with the Royal Canadian Mounted Police arrived at the convenience store. In the video, the officer can be seen talking with the couple, before the male suspect shoves the female suspect toward the officer.

An honest-to-goodness melee ensues. The male suspect tries to run for the door, but is stopped by two forces: The officer, who somehow still has a hand on him, and another person identified by CTV News as one of store owners. 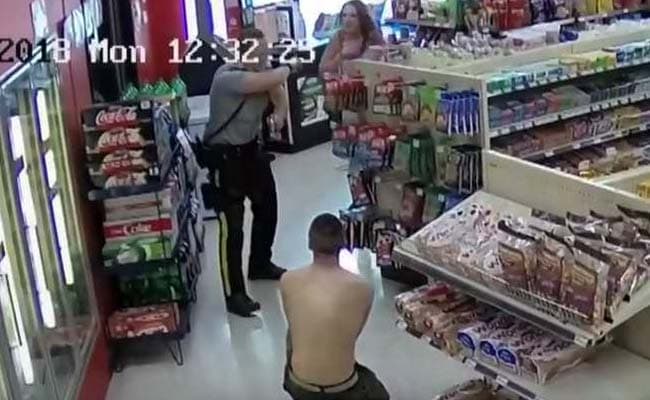 The male suspect and the officer have continued their cat-and-mouse chase with the female suspect wandering through the store.

While the male suspect and the officer have continued their cat-and-mouse chase, the female suspect has been wandering through the store. She eventually slips into the same backroom that the male suspect ran through earlier. The woman climbs up a ladder, over some shelves and ascends into some unknown place, disappearing from the frame.

The footage shifts back to the male suspect, who at this point has been subdued by the officer.

Then the video, perhaps oddly, turns to an empty section of the store. For nearly three full seconds, the camera focuses on a seemingly undisturbed aisle of motor oils, firewood, toys and auto accessories. 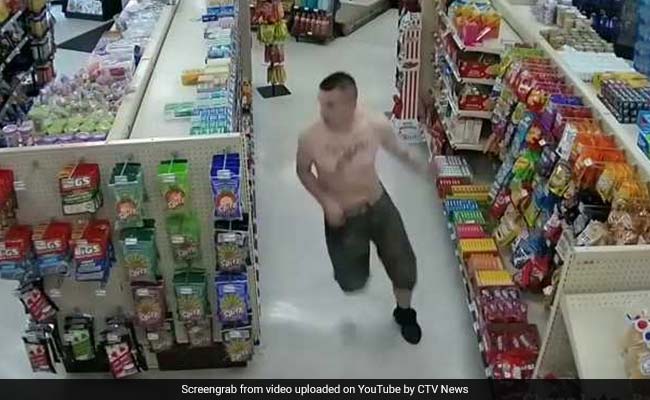 The male suspect loses his white T-shirt in the struggle and runs back into the store.

The calmness is enough to make one wonder if the incident is over. And then, pieces of building material begin fluttering down.

Soon, the female suspect comes crashing spectacularly through the ceiling.

"It was scary," store owner Bhagwant Chauhan told CTV News Edmonton. "You're thinking the person is in the back but she's up in the roof. Thank god everybody is OK."

No one was injured, police said.

Footage of the incident has since gone viral, thanks in part to a widely shared version of the video published by Slate that added "Yakety Sax" music to the background. But the real comedy comes from the video's remarkable original edit, which alternated perfectly between the male and female suspects' scenes, conveying unintended slapstick with nary a sound. Chaplin would have been proud.