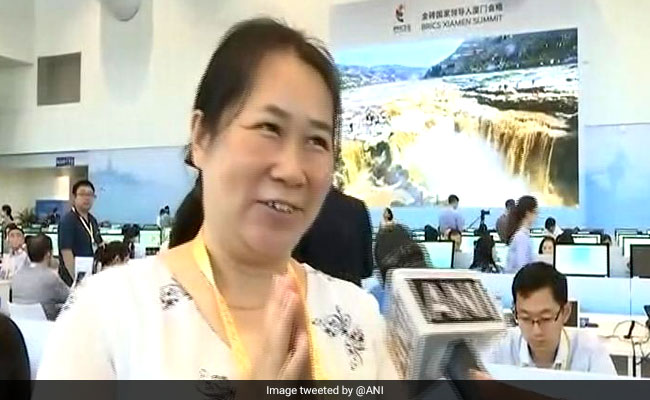 The 9th edition of the BRICS summit kicked off in Xiamen, China this morning. At the plenary session of the summit, PM Modi emphasised on greater cooperation between the BRICS nations - Brazil, Russia, India, China and South Africa - for peace and development. An example of that came from the sidelines of the conference.

Tang Yuangai, a Chinese radio journalist impressed visiting media with her Hindi skills. The reporter, who works in the Hindi service department of China Radio International, told news agency ANI, in fluent Hindi, that she loves India and its people.

"As a Hindi learner, I have travelled to the country and met many Indians. I think Indians are very honest and nice people and that's why I love India so much," said Ms Yungai or "Sapna" which happens to be her Hindi name.

Promoted
Listen to the latest songs, only on JioSaavn.com
The journalist, who studied Hindi in Beijing University and Delhi University, also happens to be a fan of Bollywood movies. A special mention came for Aamir Khan's 'Dangal' that had a dream run in China.

Folding her hands to gesture "namaste", she concluded the interview by singing the old Bollywood classic "aaja re" from the 1979 film 'Noorie'.

Prime Minister Modi will hold bilateral talks with Chinese President Xi Jinping on Tuesday. Earlier, the two leaders greeted each other with a warm handshake and broad smiles before the meeting.Click for more trending news