On Camera, Man Dressed As Superman Gets Hit By Bus He Was Pretending To Stop

The incident occurred in Brazil on May 30 and soon gained traction on social media. 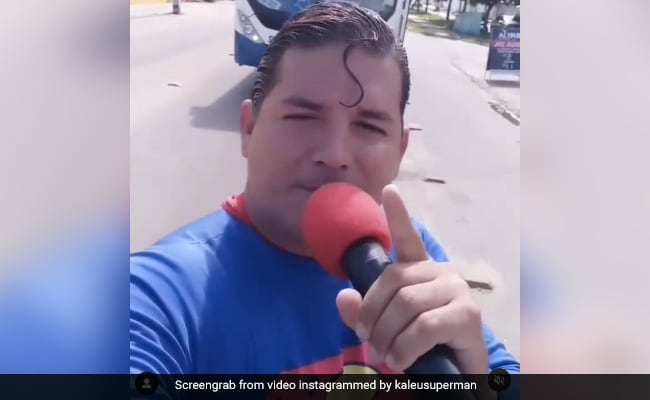 Luiz Ribeiro de Andrade was hit by the very bus he was pretending to stop.

The Internet is filled with inspiring videos of people exhibiting extraordinary grit and courage. But the same social media platforms also have ample stock of clips that feature humans making some questionable and non-rational decisions. One such video has surfaced and gained traction on various social media sites. What's more, this one even involves a Superman suit. A comedian from Brazil dressed up in a Superman costume and pretended to stop a bus. The premise of the video that featured comedian Luiz Ribeiro de Andrade was that he would show off his strength by halting the moving vehicle with one hand.

The ‘stunt', according to the Daily Mail, was attempted in the Brazilian municipality of Barra dos Coqueiros on May 30. The video of the incident soon went viral on social media. In the footage, the comedian was seen dressed head-to-toe in the Superman outfit, holding a matching microphone in one hand. He was seen standing in the middle of the road as the bus came speeding towards him. Unfortunately, Mr Luiz miscalculated the time it would take for the vehicle to reach him and was hit by the bus.

He was thrown ahead due to the impact of the hit and stumbled before he regained balance. Despite things not going as planned, the comedian was not one to accept defeat. Instead, he walked as if unaffected by the collision and even looked at the camera to say, “Now, I've seen I really am made of steel”.

He even added that he would file a complaint about the quality of the brakes on the vehicle.

The comedian shared the video on his Instagram three days ago. Watch the video here:

The report added that Mr Luiz also spoke to a local news outlet following the incident and confirmed that there was no problem with the bus' brakes. “I take responsibility for everything. I went to the bus company so that the driver would not be penalised. There was no problem with the brakes. He did what he could and I acted wrong. It's a stunt I always do, but this time it almost turned into an accident, and it wasn't serious because the hand of God was there,” he was quoted as saying.

According to news website Noticias, locals know Luiz Ribeiro de Andrade as "Superman". It's a character he has played for a decade.

Tell us what you think of this 'Superman' comedian's colossal stunt.