Boy Tries To Scare Away Grasshopper. Watch What Happens Next

Grasshoppers are no more harmless insects or perhaps humans are just too scared. This video shows both sides of a man. 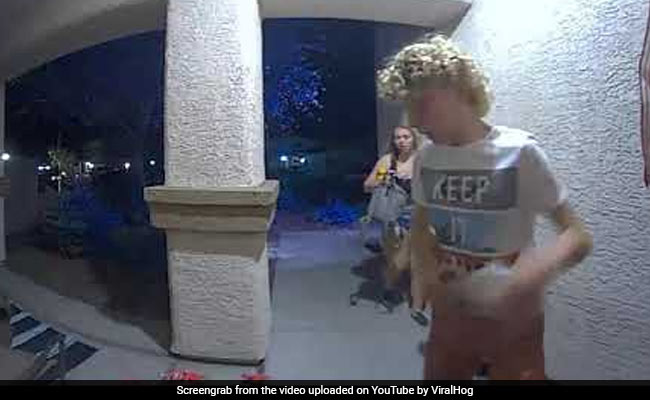 Did you grow up with ideas of innocent and harmless grasshoppers, which only flew around sunny meadows? It's time for a rethink. A video has gone viral that shows the act of scaring a grasshopper out of your house can backfire, especially if you are not an insect lover. The weak-at-heart out there, please step back. Else, if you are foolhardy enough to “deal” with insects in the house while you are scared of them, this boy's story might repeat with you.

The video, recorded from a security camera at the porch of a house, shows a young boy scaring away a grasshopper. However, his joy was short-lived as the insect soon scares him out of the porch, into the street.

The video is a clip shows a family outside their home. A teenager from the group steps forward to the door. He nonchalantly shoos away a huge grasshopper from the wall but, within seconds, is himself scared of it when it nears him and flies around. While he shouts and panics and runs out of the porch into the dark street, a woman from the group stands laughing at the scenario. Surely she hadn't expected such a warm welcome at home.

The video, which was uploaded on YouTube, was taken in Nevada, USA. The senders of the video were quoted saying, “We were coming back to the house after getting a snack and a giant grasshopper was on the porch wall. Thomas tried to shoo it away but it ‘attacked' him.”

Surely, poor Thomas believed that the insect was up for revenge while it was acting out of its defence mechanism. We just hope the grasshopper chooses a different porch next time Thomas is back home.