'Borders Are For Sarees'. American Woman's Anti-Trump Protest With Sarees 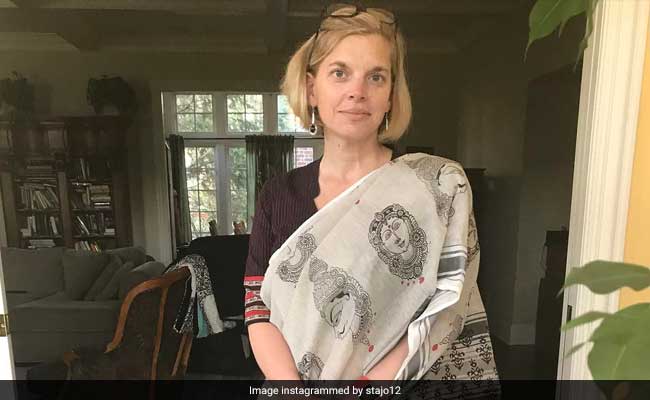 New Delhi: In August last year, union Textiles minister Smriti Irani started the "I wear handloom" campaign on Twitter to promote India's textile industry and the thousands of weavers in the country. The campaign was a huge hit with celebs and politicians and Twitter was flooded with photos of them wearing handspun clothes. But even before the campaign came into being, an American woman in Chicago was a fan of the Indian handloom.

Promoted
Listen to the latest songs, only on JioSaavn.com
Stacy Jacobs visited Chennai in 2015 which is when she was introduced to Indian textiles. Since then, her Instagram profile has been a vibrant photo album of rich, colourful Indian fabrics. Stacy soon graduated from the kurtas, tunics to the glorious Indian saree when she first attempted draping the six-yards of fabric.

5am? Can't sleep? I know, let's practice draping our fish saree! @debashrisamanta I am fully determined to rock this gorgeous handloom masterpiece. Today's lesson: though it may be counterintuitive, the close-fitting blouse is the lumpy aunty's friend. #whoknew #sareelove #sareeblouse #indianfashion #indiandesigner #jamdanisaree #iwearhandloom #makeinindia #didyougetthatinindia (yes indeed. The first of many.) (1/100)

But somewhere along the way, the clothes became a symbol of what they stood for. Stacy now wears her treasured sarees as a symbol of diversity. #iwearhandloom soon gave way to #protestsaree when she wore a blue cotton saree to the Women's March on January 21, the same day Donald Trump took oath as US President. Since then, she has draped the saree to speak on several issues and often policies by US President Donald Trump.

Here she is using the saree to protest against misogyny. "Today I am protesting the misogynistic attitude and behavior of the so-called American president, in the strongest possible terms. Think I'm too lumpy to show a little skin, Trump? You're not impressed? Get this: there are six yards of magic fabric between you and where you might grab me. These yards were made by the fearsome Dongria Kondh tribe, who refused to back down in their fight against a massive British mining company. Like the Dongria Kondh #iwontbackdown," she wrote.

#sareesunday Go or no-go? That soft and lovely new cotton Dongria saree from @utkalamrita with a fancy mirrored and embroidered blouse by @purvi.doshi via @azafashions and matchy bling earrings from my dear friends at @manjha.shop What do you think? Is it a look? It's too cold to go out with that little bit of skin showing, but I like the way it looks. Today I am protesting the misogynistic attitude and behavior of the so-called American president, in the strongest possible terms. Think I'm too lumpy to show a little skin, Trump? You're not impressed? Get this: there are six yards of magic fabric between you and where you might grab me. These yards were made by the fearsome Dongria Kondh tribe, who refused to back down in their fight against a massive British mining company. Like the Dongria Kondh, #iwontbackdown #protestsaree #sareesunday #sareenotsorry #diversitymatters #didyougetthatinindia (obv) #womensmarch #alwaysingratitude

A saree to protest against Donald Trump's ban on Muslims from several countries. "I stand in opposition to bigotry, hatred, and the current American president," she said.

Her saree against the president's health care bill which was eventually rejected.

This is not just another #sareesunday and this is not just a saree. If you've been with me for a while you know I love and respect @mayankanandshraddhanigam and the incredible intelligent thoughtful looks they bring out each and every season. So when @mayankanandofficial told me he'd send me a saree, I was beyond excited. Imagine my surprise when they sent me a saree that's a statement, a set of feelings, an example AND a challenge! This stunning soft muslin from West Bengal was the exact textile that got me hooked on #iwearhandloom I have it writ small, in a scarf that I love and have posted many times. I have it in a lightweight summer dress that goes on like a dream and feels like a gentle wind. This saree feels like rest, like vacation, like tea and a book on a quiet afternoon. It also kicked my saree-novice a$$ trying to drape it nicely. The first half-and-half saree in my collection -- nobody new it would be that hard. Which brings me to the point: I wear this important and difficult #protestsaree to say to our (dumb as a box of rocks) so-called president: Nobody knew health care was so difficult? #bullshit Nothing is more important than healthcare. I stand firmly against the efforts of "conservatives " to deny health coverage to our most vulnerable populations. Mental health, physical health, reproductive health. Get with the program, dude. #sareenotsorry #keepcalmandsareeon #didyougetthatinindia (yes, yes. Saree by @mayankanandshraddhanigam necklace by @manjha.shop and tshirt from @jamesperse ) #diversitymatters #istandwithrefugeesandmuslims #istandwithbrownpeople #istandwithlgbtqpeople #alwaysingratitude

She even backed Indian artisans by wearing a tussar silk tribal saree from Odisha.

With great pride and enormous gratitude I am wearing the most magnificent pure tussar silk tribal saree from Odisha. This extraordinary hand-woven treasure speaks of the dolabedi, the Lords in Odisha's famed temples preparing for a stroll. It came to me from the energetic and tenacious @utkalamrita and I am humbled by the artistry and skill demonstrated so beautifully. Today and #alwaysingratitude for the privilege of being a small part of the global initiative to celebrate handloom textiles. During this #fashion_rev week, take a few minutes and ask yourself #whomademyclothes If the answer is the name of a corporation, please consider changing things up. This #protestsaree stands for the rights of artisans and weavers to earn a living wage practicing their centuries-old craft and the obligation of consumers to be ever vigilant. #iwearhandloom #makeinindia #didyougetthatinindia (I did!) #sareelove #sareenotsorry #keepcalmandsareeon #sareeonmovement

This one to protest against the US President refusing to declare his tax returns and his proposed tax cuts for the rich.

As we near the 100th dark day of the Trump administration, I can't help but reach for my treasured @mayankanandshraddhanigam muslin #protestsaree. The boxes and lines of the saree remind me of a spreadsheet, which reminds me of Trump's proposed tax cuts on corporations and the super rich. How can a man who refuses to show his tax return be given free reign to change the tax code? The blatant abuses of power, nepotism and corruption make a mockery of the office of the President. Violence, hatred and ignorance are the currencies traded in this White House, and I for one want nothing to do with them. #impeachtrump #keepcalmandsareeon #sareeonmovement #alwaysingratitude #didyougetthatinindia (yes, from my friends at @mayankanandshraddhanigam and I am so so grateful) #diversitymatters #iwearhandloom #fashion_rev #whomademyclothes #makeinindia

#didyougetthatinindia (yes.) Second most asked question today: "Why are you wearing that?" #whyindia 1) This saree was hand-woven by master weaver Mr. K. Prakash in 11 days. Eleven. Days. Epic. 2) Because @ethicus.in and parent corporation Appachi Eco-Logic are devoted to their products, clients, employees and their families, and the environment. Even tigers. They live and work where there are tigers. Wrap your mind around that. 3) Because India knows things about beauty and grace that Stacy does not. And India is kind enough to teach me, saree by saree, one kurta or jacket or dress at a time. And of course 4) Because borders are for sarees. Fashion, meet resistance. #protestsaree #sareenotsorry #bordersareforsarees #keepcalmandsareeon #alwaysingratitude

She even reposted the 'original' protest saree.

The original #protestsaree : linen, the grandmother of all human-made textiles. Indigo, literally the color of India; the color of work, the color of democracy. Pink, for women everywhere who fight every day for the rights others take for granted. Pink with triangles, for the we who love differently. The saree, for the millions of brown women around the world who struggle with powerlessness and voicelessness but never give up. I will never stop using my #whiteprivilege in the service of others. And it is with so much pleasure I add the block-printed handmade blouse from @manjha.shop The grace and fearlessness of young entrepreneurs and artists is breathtaking to witness and a privilege to support. #bekind #bepowerful #bestrong #didyougetthatinindia #alwaysingratitude #sareeblouse #sareenotsorry #protestsaree @thefareastartstudio #womensmarchchicago #diversitymatters #istandwithrefugeesandmuslims #sareenotsorry (16/100)

Today's #silksaree with all-over #kantha made its North American debut on the lovely Joanna @twopeople_andapuppy while we were #homefortheholidays in #puertovallarta. I chose it today to represent my strongest objection to Trump's dangerously isolationist policies: the ridiculous wall he claims to be building, limiting the rights of Brown people to enter America. #sareenotsorry Trump, this privileged white woman believes in bringing people together, not tearing us apart. #keepcalmandsareeon #womensmarchchicago #protestsaree @thefareastartstudio @saree.not.sorry @sareeonmovement #alwaysingratitude so glad Joanna rejoined the Home Team! She takes great photos for me. #diversitymatters (11/100)

Bringing people together, one saree at a time.