"He was literally moving across the grass at full speed with the frogs hanging on," said Paul, who shot the photograph. 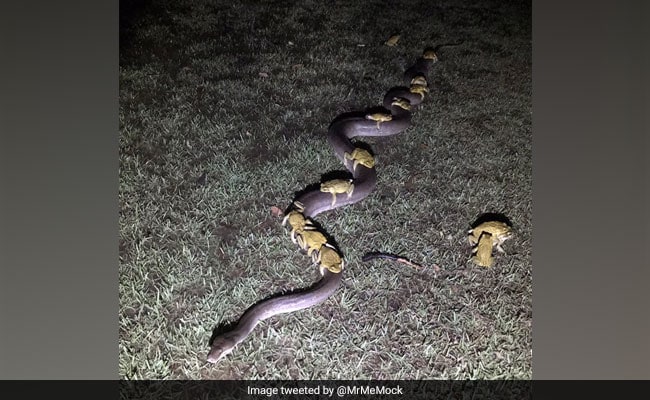 A viral pic shows 10 cane toads riding on the back of a python.

A huge storm in Australia on Sunday night brought with it an unusual sight - 10 cane toads riding on the back of a python. According to BBC, Paul Mock, of Kununurra in the far north of Western Australia, was at home on Sunday night with his wife when the storm hit their property.

The Guardian reports that the huge storm dumped 70mm of rain into their dam, which forced Paul to venture out and check on it - which is when he saw the bizarre sight.

"The lake was so full it had filled the cane toad burrows around the bank and they were all sitting on top of the grass - thousands of them," he told the Guardian.

"He was in the middle of the lawn, making for higher ground."

He was their resident python - a 3.5m snake called Monty - escaping the flood with a band of cane toads using him as transport.

"He was literally moving across the grass at full speed with the frogs hanging on," said Paul.

"I thought it was fascinating that some of the local reptiles have gotten used to the cane toads and not eating them."

Paul Mock sent a picture of the cane toads on the python to his brother Andrew, who posted it on Twitter.

68mm just fell in the last hour at Kununurra. Flushed all the cane toads out of my brothers dam. Some of them took the easy way out - hitching a ride on the back of a 3.5m python. pic.twitter.com/P6mPc2cVS5

Since being shared online, the picture has gone massively viral on social media, eliciting a lot of amazed reactions, virtual shrieks of horror and even some hilarious jokes.

I was today years old when I found out toads use snakes as public transport.

Amazing! Must be with Uber to fit that many on the ride!

UGH at the two toads who no doubt crowded the guy in the middle WHEN THERE WERE PLENTY OF OTHER OPEN SPOTS AVAILABLE!

However, the most intriguing reaction to the viral photograph came from amphibian expert Jodi Rowley, a senior lecturer in biological sciences at the University of New South Wales. Ms Rowley pointed out that the toads in the picture were all male cane toads, trying to mate with the python.

They're all male Cane Toads attempting to mate with the python!!!! Male Cane Toads are often a little too keen.... That is an amazing photo!!! Please record any and all frogs you hear calling (incl. toads) with the free FrogID app https://t.co/DRd8Epfi38

"Male Cane Toads often get a bit carried away," she added, sharing a picture of a cane toad trying to mate with a rotten mango.

Male Cane Toads often get a bit carried away. This AMAZING video reminds me of the time I found a Cane Toad trying to mate with a rotting mango in North Queensland! pic.twitter.com/g2kUBvOUV1

Horrified or amazed? Let us know what you think of the pic using the comments section below.

A List Of All The Long Weekends In 2020. You Can Thank Us Later