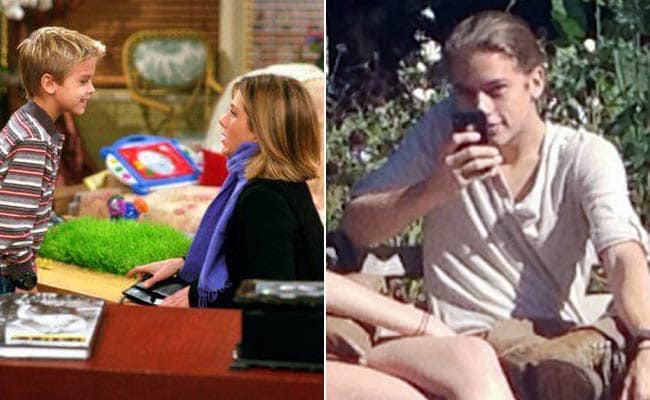 Dear fans, take a moment from either rejoicing over the upcoming reunion or fretting over the expected absence of Chandler Bing (Matthew Perry) - this is the F.R.I.E.N.D.S.-related thing you need to see today.

Remember Ben, Ross Geller's (David Schwimmer) first born, on the show? Of course you do. The character of Ben was mostly played by actor Cole Sprouse (partly by his twin Dylan, they also played Adam Sandler's son in Big Daddy). The child star is all grown up (23-years-old) now and is still up to his clever tricks, just like Ben after a little nudging courtesy Rachel (Jennifer Aniston) on the show.

Cole currently models and also runs a hilarious Instagram account called 'camera_duels' in which he posts photos he takes of all those people who try to stealthily click pictures of him.

"This instagram is dedicated to the people out there who secretly take photos of me, and how I take photos of them first. May the fastest camera win," he explains on the photo sharing app.

At a time when celebrities across Hollywood and Bollywood are voicing their annoyance with paparazzi and camera-phone wielders who click celebrities without permission, it seems Cole has a cool trick up his sleeve. He makes the messers the messies (as his Uncle Chandler would say).

Take a look at how Cole wins his camera duels:

A blinding flash. Quick blur. Momentary desperation. Primal cooing. Inevitable defeat. Temporary victory. Ahh yes, I know this ritual well. Is it wartime atrocity? Nay, tis a #cameraduel. The subway is a photographic operating theater, and I am the cold body upon the table. So many shots lay unused within my library, that I intentionally avoid posting many of them. This one, this one however. This one is different. The holiday spirit is in full form. There, behind sad dad and the ghost of Christmas past, a duel was stewing. A young woman pulled the number1 #rookiemistake: flash. So excited was I, that I blurred the shot. Yes fair people, even pros are prone. Fear not, the bright light of shame shines through, and the flash is still visible. Unfortunately, the only real illumination was upon her characteristic frown of embarrassed defeat. #HeKnowsWhenYouveBeenBadOrGood #ColeInYourStocking

Eating in public is dangerous when my brother and I are together, mostly because duels are a constant occurrence. Have you ever had a photo taken of you while you were #UvulaDeep in a shake shack burger? No? Well it's #Lovecraftian, and it's something you inherently want to keep out of the private albums of kids with wayyyy too much liberty on #WorldWideWeb. This was the setting of our present duel. Female Zack and Cody here were trying to pull the ol' "casual selfie" technique, one that frames their target in the background of an otherwise Michelin portrait of one's many chins. I'll admit I always feel a bit guilt ridden when dueling children--it's a tad dubious to take the life of a child for social currency. #ItWillEventuallyBecomeNormalThough. They shot, I shot first. And while her back is turned, I'm sure the mother's maternal instincts had alerted her to her childrens' demise. #cameraduels #LittleDutchChildren #TheHaircutTranscendsGenerationGaps #pattyportraiture

I shot first. She looked at me and whimpered, "a-am I gunna end up on your instagram?" I let out a reassuring smile, "not anymore" I said calmingly as I looked the poor girl in the eyes and lied to her soul. Her friends joined me in Recognizing her guilt, they laughed, I laughed, WE laughed. It was a good time, you had to be there. Apparently graduation is not even enough to warrant acting like an adult, but who am I to talk?, I wore depends under my gown. Now that I've graduated people have been asking me "Cole, will you post more now?" To which I always say, "how did you get in my house?" #NYU #Graduation #cameraduels #pleasego

Wow, look at the face she's making. The human mouth should only open that wide for two reasons: (1) screaming 'fire,' and (2) wailing during moments of overwhelming humanity. Apparently I warranted that primal facial contortion. YES I, it is I in that photo. I like to give opposing perspective to the #cameraduels, mainly because it's fun to see myself shoot victorious, but also because some of you...incurable skeptics...don't believe the duels actually happen. They say "Cole youre paranoid!" And they're right, I am, but clearly for a reason. This shot actually shows the victims POV from the last duel I posted. If you zoom in close to my face, you can actually see the twisted grin. Zoom even closer and I'm sure you could see Satan in the reflection of my goggles. Oh wait, nevermind... that's not Lucifer, that's just the girl screaming. #MortalQuestions #ScreamingSelfie #Opposhot

Not but 30 seconds after arriving on the plane, a quick glance to my right revealed this seafoam sapiens breathing heavily and scrambling for her phone. Little lady must've thought, just because her phone matched her shirt, that I wouldn't detect her desperate photos. Firstly, my vision is based on fear, and I saw you right away. Second, nay. The victim: @tater_tots15 claimed it was a "tie." Her innocent account name perfectly reflects how violently she lost. She posted a picture of our duel, in which my debonair gait and relaxed posture so too reflects how prepared I was for her ludicrous display of #AeronauticArseholery. My Cheshire grin must have scared the other passengers, and I was quickly escorted off the plane for being #TooDamnBomb #cameraduels