"I'm angry, I'm disappointed, but most of all, I'm sad to not be representing my country." 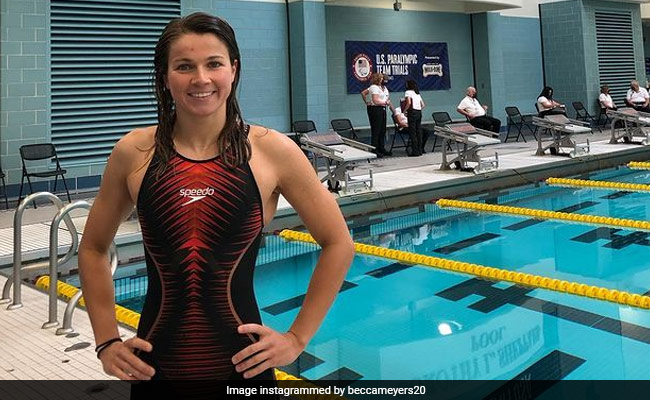 US Swimmer Becca Meyers has withdrawn from the Paralympic Games.

American swimmer Becca Meyers will not compete in the Paralympic Games being held in Tokyo, this year. The swimmer, who is hearing impaired and visually challenged, withdrew from the tournament after being denied a personal care assistant at the event. The three-time gold medalist was one of the favourite contenders for the top spot at the Games. Ms Meyers announced the decision with a statement on Twitter and said that she was “angry” and “disappointed” at the turn of events. The statement was accompanied by a tweet that said, “Heartbroken to share that I'm withdrawing from the Tokyo Paralympic Games. The USOPC has repeatedly denied my reasonable and essential accommodation because of my disability, leaving me no choice.”

In her statement, the 26-year-old said, “I'm angry, I'm disappointed, but most of all, I'm sad to not be representing my country.”

Referring to the United States Olympic and Paralympic Committee, she wrote: “The USOPC has denied a reasonable and essential accommodation for me, as a deaf-blind athlete, to be able to compete in Tokyo, telling me repeatedly that I do not need a Personal Care Assistant (PCA) 'who I trust' because there will be a single PCA on staff that is available to assist me and 33 other Paralympic swimmers, 9 of whom are also visually impaired,” asking why she — as a “disabled person” — had to fight for her rights in 2021.

Heartbroken to share that I'm withdrawing from the Tokyo Paralympic Games. The USOPC has repeatedly denied my reasonable and essential accommodation because of my disability, leaving me no choice. Full statement below: pic.twitter.com/p9tKsbPip2

According to the Washington Post, the US Olympic and Paralympic Committee (USOPC) officials said that they were dealing with “unprecedented restrictions” with regard to what is possible on the ground in Japan, which is hosting the Games. The committee said that the Tokyo Organizing Committee of the Olympic and Paralympic Games was not permitting any personnel other than operational essential staff, into the country. This, they said, was as per the directions of the Japanese government.

Ms Meyers found support from Maggie Hassan, United States Senator for New Hampshire, who called on the US Olympic and Paralympic Committee to ensure that “all athletes receive the accommodation and support they need to compete”.

Becca Meyers is a six-time Paralympic medalist — but she's facing dangerous inequities that are forcing her out of this year's games.

I'm calling on the U.S. Olympic & Paralympic Committee to ensure that ALL athletes receive the accommodation and support they need to compete. pic.twitter.com/vrsrRPConK

Several social media users, too, extended their support to the athlete in the comments.

One user said, “This is completely unacceptable. It is heartbreaking and it is bigoted...”

This is completely UNACCEPTABLE. It is heartbreaking & it is bigoted. What can we do to support you, Becca? The community is in full solidarity with you. I'm so hurt & angry for you at this blatant ableism. ???? #DisabilityTwitter#Paralympics

This is not only a denial of your rights, but also quite an absurd policy. One PCA for 34 people is ridiculous, plus dangerous. If one of the athletes gets sick or even the PCA themselves gets Covid, the chance of spreading the virus will be at its highest.

I'm so sorry to hear this Becca. Appalling disabling barriers.

Ms Meyers was born with a condition known as the Usher syndrome. It is a rare genetic disorder that leads to loss of hearing as well as sight.

Video: Cars Float Down A Road After Devastating Floods In China