As Delhi Chokes With Thick Smog, Panic (And Jokes) On Twitter

How Delhi residents are reacting to the dip in air quality 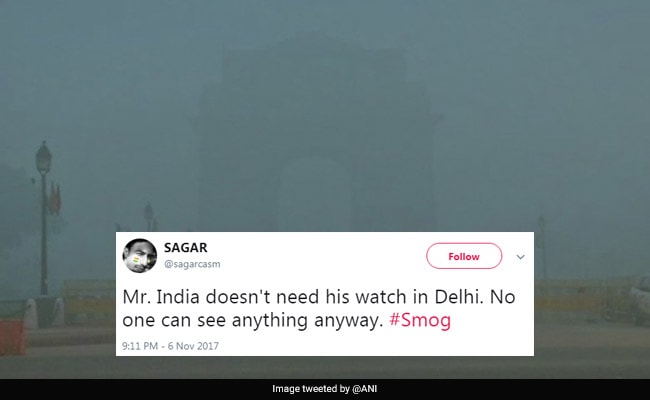 Visuals of the smog at India Gate in Delhi. (ANI)

As the national capital region woke up to a thick blanket of smog today morning, tweets about pollution in Delhi-NCR started pouring in thick and fast. Many took to Twitter to complain about the poor visibility and the deteriorating air quality in Delhi. Others addressed their tweets to the central and state government and asked them to look for a solution to the smog problem which, in 2016, had forced schools to remain closed for three days as the National Green Tribunal declared an environmental emergency in Delhi.

#Delhi: Visuals of smog from India Gate and Rajpath pic.twitter.com/vsnPbWdlHr

Here is how Delhi residents are reacting to the spike in pollution levels.

Delhi is choking, said many

Dear @ArvindKejriwal Delhi is choking and government continues to be in denial. This is an emergency situation, WAKE UP! #MyRightToBreathe

Delhi is choking with pollution.
Forget bullet train,Digital India,Make in India etc.
There is existential crisis in Delhi.
Do something

Behind that death Grey wall of #smog today, is the invisible city of #gurgaon. Taken at 8ish at Delhi Gurgaon border. Do authorities care? pic.twitter.com/VI7w62ENqP

And others resorted to humour

I tried making small-talk at work about the fog problem in Delhi. Then this one smartypants corrected me and said it's actually 'smog' and not 'fog'. I wanted to sock him in the face but I didn't, because he's my coworker and also because I couldn't even see where he was.

Mr. India doesn't need his watch in Delhi. No one can see anything anyway. #Smog

#Smog in South Delhi is causing irritation in throat. It's more like Hauz

In a bid to reduce pollution in the city, the Supreme Court had banned the sale of firecrackers before Diwali this year. Even so, the days after Diwali saw the air quality dip to 'very poor' levels in parts of the capital.