"An angel in the form of a Chevy Cruze may have saved the lives of a couple pushing a stroller," Phoenix Police Department wrote 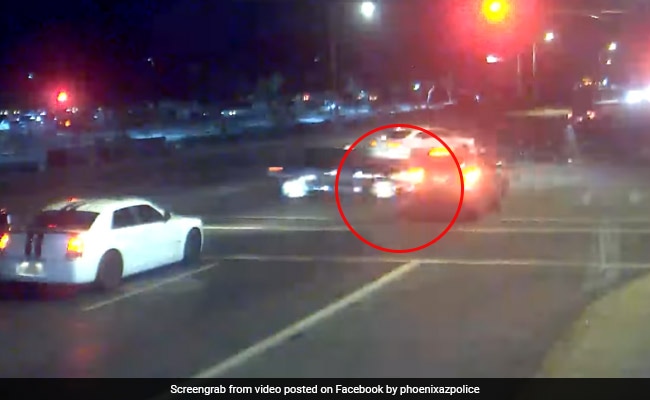 A couple pushing their baby in a stroller at a busy intersection had a narrow escape when a speeding Jeep barreled towards them while running a red light. They were saved in the nick of time when another car smashed into the Jeep, stalling it and giving the family time to escape. The incident occurred on Tuesday in Phoenix, Arizona.

The Phoenix Police Department released stunning footage of the car crash on Wednesday, praising the driver of the Chevrolet Cruze that smashed into the Jeep as an "angel".

The 13-second-long video shows the Jeep, driven by an intoxicated man identified as Ernesto Otanez Oveso, speeding through a red light and almost striking the family. At the same time, a Chevrolet Cruze enters the intersection and crashes into the side of the Jeep, saving the family.

"An angel in the form of a Chevy Cruz may have saved the lives of a couple pushing a stroller through a Phoenix crosswalk," Phoenix Police Department wrote on Twitter. On Facebook, they shared details of the incident, saying that Mr Oveso and a woman in the car with him took off running after the accident.

According to police, the 28-year-old driver of the Jeep was arrested on DUI and aggravated assault charges. The woman who was with him managed to escape the scene and has not yet been apprehended.

In a later post, the Phoenix Police Department thanked the 27-year-old driver of the Cruze that blocked the Jeep, identifying her as Shannon Vivar. "The collision saved the lives of three pedestrians as they crossed Indian School Road," they wrote.

"I was just happy we were all alive," Ms Vivar said of the incident.