Read inOther Languages
This Article is From Jul 10, 2020

"Ever seen tigers fighting, it is no less than wrestling," wrote IFS officer Sudha Ramen. 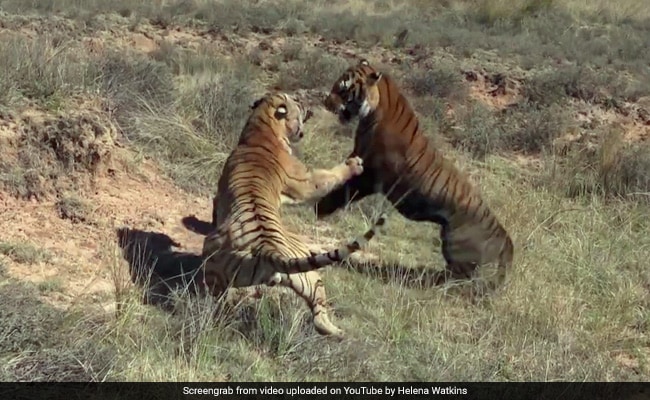 Two tigers in a brutal fight in this video from South Africa.

A dramatic video that is going viral on social media shows a fierce fight between two male tigers. The seven-year-old video resurfaced on Twitter this morning after being shared by Indian Forest Service officer Sudha Ramen, who explained that these big cats establish dominance through such fights.

The video was filmed by Helena Watkins at the Tiger Canyon wildlife and safari park in South Africa in 2013. While the original clip on YouTube has garnered a whopping 7 million views, various versions of it have cropped up on social media again and again over the years - going viral for the video's shock value.

The clip shows a fight between two male tigers that lasts several minutes. The two tigers growl, scratch and wrestle with each other in their bid to establish dominance. Male tigers clash to defend their territory, and it is the most common reason for fights. Tiger fights also occur for mating rights with a female.

"Ever seen tigers fighting, it is no less than wrestling. The dominance will be established only through such fights," wrote Ms Ramen while sharing the video. "The winner wins the territory and if lucky the tigress too. The loser has to move out and wander to find a new home," she added.

Ever seen tigers fighting, it is no less than wrestling. The dominance will be established only through such fights. The winner wins the territory and if lucky the Tigress too. The loser has to move out and wander to find a new home.

The dramatic video has garnered over 1,200 views since being shared on the microblogging platform. It has also collected thousands of stunned comments on YouTube.

"The first 10 seconds were far worse than any other fight I've seen," wrote one commenter, while another said: "Those scratch noises are painful to listen to."

This is not the only time that a brutal tiger fight has captured social media's attention. Last year, IFS officer Parveen Kaswan also shared a video of two Ranthambore tigers in a violent territorial clash.