On Camera: Two Ranthambore Tigers In A "Brutal" Fight Over A Tigress

"That is how a fight between tigers looks like. Brutal and violent," wrote IFS officer Parveen Kaswan 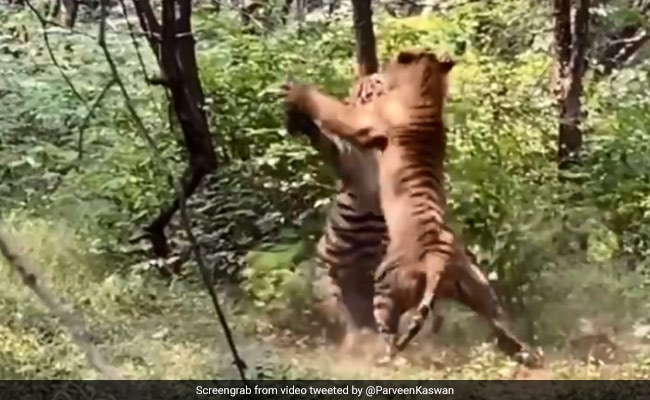 A video going viral online has captured the sight of two tigers embroiled in a furious fight. The video features tiger T57 and T58 of Rajasthan's Ranthambore National Park, according to Indian Forest Services officer Parveen Kaswan. Mr Kaswan shared the video to Twitter on Wednesday, calling it a "brutal and violent" fight between two brothers.

According to Ranthambore Guides, T57 is a tiger named Singhsth, while T58 is named Rocky. They are both sons of tigress Sharmili from the Jaisinghpura area of the park.

After sharing the video, Mr Kaswan informed his followers that the two tigers were fighting over a tigress - T39 - named Noor.

His video shows one of the tigers sneaking up behind the other and starting the fight. The minute-long-video has captured the fierce battle between the two. The tigress Noor can be glimpsed running away at the beginning of the video. Watch the video below:

That is how a fight between #tigers looks like. Brutal and violent. They are territorial animals & protect their sphere. Here two brothers from #Ranthambore are fighting as forwarded. (T57, T58). pic.twitter.com/wehHWgIIHC

Since being shared online one day ago, the video has collected over 24,000 views and a ton of comments.

"Majestic," wrote one person, while another called the fight "scary".

And for those who are wondering who won the fight, it was tiger T57 or Singhsth, according to Mr Kaswan. He also added that nobody was seriously injured in the fight.

"As many are asking about the results. T57 won. Nobody is seriously injured. It was for the tigress T39. Which can be seen there in the video," wrote Mr Kaswan.