8-Foot Python Spotted Inside Air Force Plane In Agra. How It Was Rescued

The eight-foot-long Indian Rock Python was trapped inside the undercarriage bay of the right wing of the AN-32 aircraft at the Agra airbase. 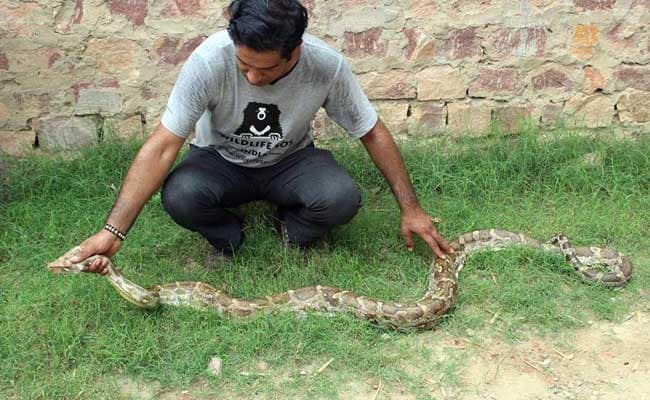 Agra: An Air Force transport plane at the Agra airbase had an unusual and unwelcome guest on Wednesday - an eight-foot-long Indian Rock Python. The large reptile was trapped inside the undercarriage bay of the right wing of the AN-32 aircraft. A Wildlife SOS team spent nearly five hours trying to rescue the snake.

Two expert snake-rescuers from the NGO explain it took them nearly five hours to rescue the distressed python. They say it was a challenge for them to ensure the large snake remained calm and unhurt.

"We had to get the python out of that narrow space keeping its safety in mind," a Wildlife SOS team member tells the news agency PTI. "We patiently waited for the snake to loosen its grip so that we could carefully transfer it to a transport carrier," the official adds.

The python is being kept under observation by Wildlife SOS and will be released into its natural habitat when found fit.

"Rescues like these require skills and patience. We thank the Indian Air Force for considering the well-being of the python and reporting the incident to us," says Baiju Raj M V, Director of Conservation (Projects) at Wildlife SOS.

The Indian Rock Python is a large non-venomous species found in India, Pakistan and Sri Lanka. It is a protected species under Schedule I of the Wildlife Protection Act, 1972.