In South Africa, a group of 250 dancers broke the record for the largest amapiano dance. 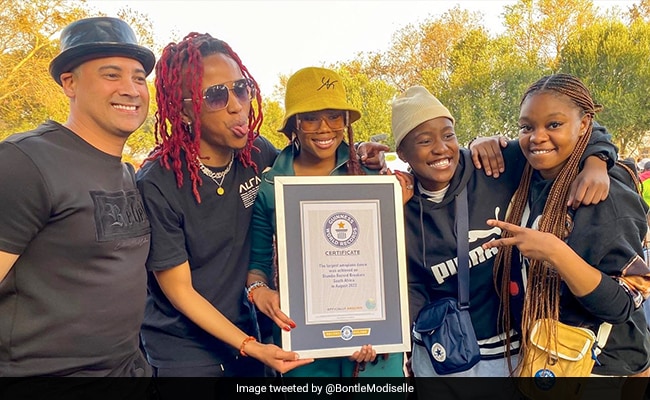 The effort was captured on camera for the television show Stumbo Record Breakers.

For the largest Amapiano dance, three South African performers broke the Guinness World Record. 250 people gathered at the Hector Peterson Memorial in Soweto to dance to musician Alfa Kat's most recent Amapiano song, "Shaya Lento," with the help of actress and singer Bontle Modiselle and "World of Dance" coordinator Quintus Jansen, according to the South African radio station Jacaranda FM.

"The largest amapiano dance consists of 252 participants and was achieved by Quintus Jansen and Bontle Modiselle (both South Africa), on Stumbo Record Breakers, in Soweto, South Africa, on 18 August 2022. Bontle choreographed and taught the five minute amapiano dance to the group of participants organised by Quintus. They danced to a specially made song by Alfa Kat" Guinness World Records said on its website.

When the record was successfully broken, a Guinness World Records adjudicator who was present at the event gave the organisers a certificate.Singer Bontle shared images of the official certificate along with the milestone announcement on her Instagram account.

"We did it @quintusjansen! Thank you so much for trusting me with this. A true honour! Shoutout to my bro @alfakat__ on the fire production of the music. Thank you to @tllhogi_m & @kananelo_n_ who were my amazing support - I'm blessed and happy to share moments with you two. To every dancer who came and showed up, thank you for making it all possible. It would have been nothing without you," she further said.

"This is an incredible moment in South African dance history to cherish forever! God engineering!," she added.