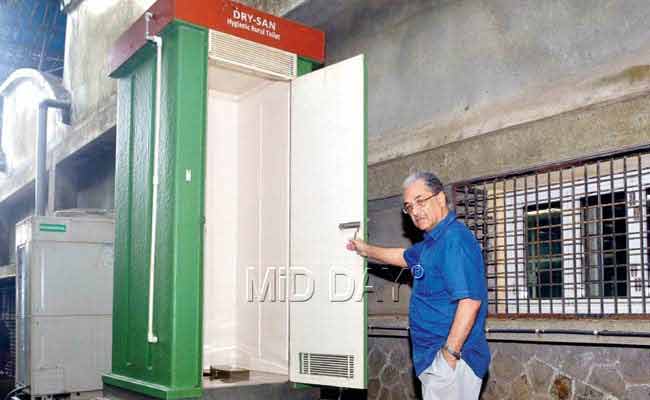 Mumbai: The Dry San Hygienic Rural Toilet is a waterless system where waste doesn't have to be flushed. Prof Dr Kishore Munshi, senior professor and former dean of the Industrial Design Center at IIT-B, has developed the Dry San to reduce open defecation, improve hygiene, and help vulnerable sections including women and children.

"The project has been developed for rural India, targetting mainly the farming community with the basic premise that there is dearth of water in most rural areas. Thus, the flush toilet cannot be part of the solution.

Therefore, an autonomous solution based on water-less or minimal water usage was invented," said Prof Munshi. The Dry San has been developed after garnering financial support from the Ministry of Drinking Water and Sanitation, along with CTech, an IIT-B incubated designed company. It comes in various dimensions, along with an easy manual.

While work on the project started in 2011, the final product was ready by 2014. For starters, a design was put in place, which is not only easy to build but maintain too. "In the conventional water-based sanitation system, there is heavy use of water to maintain the water-trap and for flushing requirements.

Flush-toilets and sewerage systems not only involve huge infrastructure and high maintenance costs, they also cannot ensure a clean environment. In case of failure, they pose a far greater risk to public health and environment, which is more likely to happen in rural, semi-urban situations," said Prof Munshi.

The Dry-San converts waste material, which otherwise pollutes land and water bodies, into a resource (fertiliser from urine and manure from solid waste) for the farmer. The conversion is done by non-chemical and natural aerobic decomposition, facilitated by a patented design.

Another highlight that sets this design apart from others is that, while in septic tanks, there are chances of poisonous gases leading to explosions, there are no gases formed in Dry San's underground pit. Water is seeped into the soil and only solid waste remains, which eventually decomposes.

"If a family of five uses this toilet every day, they can open the pit once in eight or 10 years to clean the decomposed waste, which can easily be used as fertilizer," added Prof Munshi. While there have been various sanitation projects introduced by the government, most have lacked maintenance.

"During an all-India survey, we found out that most public toilets use ceramic tiles, which eventually give away and make the toilet unusable. Instead, our design uses stainless steel - easy to use and maintain," he said. Building one Dry San toilet from scratch can cost up to Rs 70,000, including labour cost. This cost can be reduced if they are built in bulk.

One of the first such units was placed at a labour camp next to the IIT-B campus, where labourers have been using it. "The workers decided that this particular cubicle will be used only by women and children. After a year, it's still functioning well. BMC authorities have also touched base with us to place such toilets in slums that are not accessible to the main drainage system of the city," he said.