Potholes In Mumbai Get Congress's Attention Along With Some Repairing

The party had started the campaign on Thursday after Maharashtra Chief Minister Devendra Fadnavis had claimed that the number of potholes on Mumbai's roads had come down drastically. 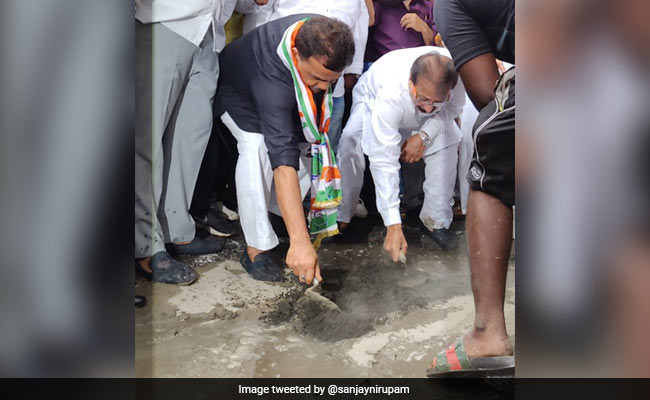 Congress workers today counted and filled potholes in suburban Bandra as part of its campaign, titled "Aao Potholes Giney" (lets count potholes), and accused Mumbai's civic body of not being prepared for the monsoons.

The party had started the campaign on Thursday after Maharashtra Chief Minister Devendra Fadnavis had claimed that the number of potholes on Mumbai's roads had come down drastically.

Sanjay Nirupam, the Congress' city unit chief, today said that the Shiv Sena and the BJP should quit the Brihanmumbai Municipal Corporation if the civic body was unable to keep the city's roads free of potholes.

He also lashed out at the BMC for failing to keep a 48-hour deadline, made on Thursday by the civic body itself, to repair potholes.

The 48-hour "promise" was made by Additional Municipal Commissioner Vijay Singhal in the BMC's general body meeting after corporators pulled up the civic administration over potholes.

"The BMC had given themselves a deadline of 48 hours, which has ended today. Yet, the BMC has failed to repair most of the roads and their apathy and incompetency is taking the lives of Mumbaikars. These pothole-related deaths in Mumbai prove that the BMC, like every year, was not prepared for the monsoons," Mr Nirupam told reporters in Mumbai.

He claimed that the civic body would require 2,500 tonnes of cold mix to repair all the potholes while it only had 40 tonnes in its stock.

"This means potholes are here to stay. The BMC should repair roads and ensure potholes do not claim more lives. If they cannot do so, the Shiv Sena and BJP should quit the BMC," he said while participating in the pothole-repairing drive.