The Indian Navy has opened food stalls at several locations in Mumbai, and has asked exhausted and hungry people who have been battered by rain to eat at these pit stops 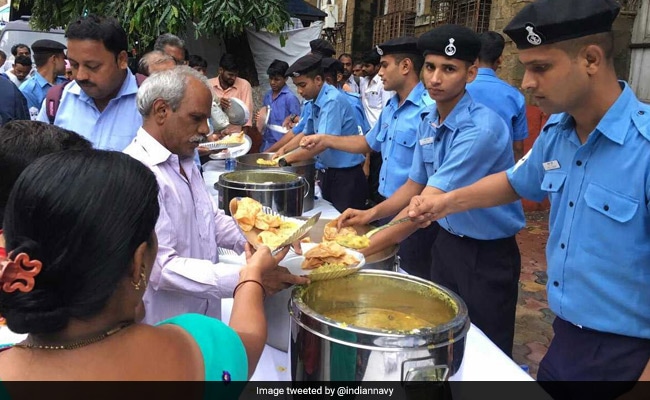 New Delhi: People stranded across Mumbai after the city was pounded by rain -- the heaviest in 12 years -- won't have to go hungry today. The Indian Navy has come to their rescue.

It has opened food stalls at several locations in the city, and has asked exhausted and hungry people who have been battered by rain to eat at these pit stops.

"Indian Navy for you... Anytime, anywhere, every time," he said.

The Western Naval Command has readied some shelters to take in people who got stranded in the rain that was 30 times more than usual. People can stay at the Navy-run shelters at Sagar Institute, Colaba; INS Trata, Worli; INS Hamla, Marve, and Material Organisation, Ghatkopar, the spokesperson said.

Naval helicopters along with five flood-rescue teams and two diving teams are on standby to rescue people if the Mumbai authorities ask for help.

The Met office has predicted more rain in the next 24 hours and has urged people to stay indoors. Five people have reportedly died in the intense rain, heaviest since July 2005, when floods paralysed the city.

Thousands waded through waist-deep water yesterday, abandoning cars to walk. There were massive traffic jams that cleared only by late in the night. Traffic on the Bandra-Worli Sea Link was stopped for several hours to clear traffic gridlocks.
Comments
Indian NavyMumbaiCST