In clips shared on social media, protesters were seen raising slogans and singing protest songs as they waved the national flag 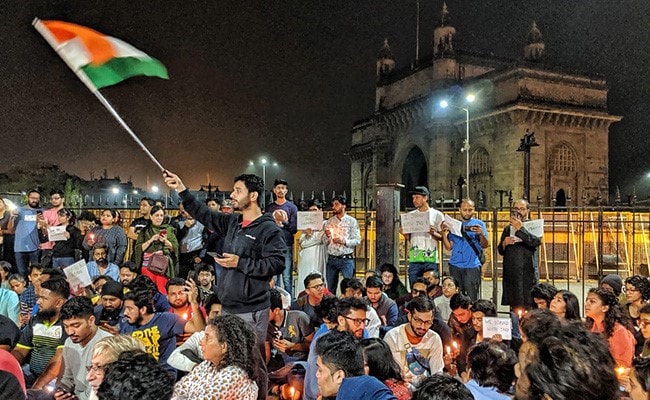 Students sang protest songs as they gathered at Gateway Of India in Mumbai.

Hundreds of students in Mumbai have gathered at the iconic Gateway of India in Mumbai as they continue their protest, which began last night, against Sunday's mob violence at Delhi's Jawaharlal Nehru University that has triggered outrage across the nation. In a statement, students said they have "occupied the heart of the city at Gateway until we don't know when".

The protest began last night with a candlelight march that was also attended by JNU alumni - Umar Khalid and Kunal Kamra.

In clips shared on social media, protesters were seen raising slogans and singing protest songs as they waved the national flag. Many of the slogans targeted the Akhil Bharatiya Vidyarthi Parishad, the RSS-linked student union alleged to be behind the attack.

The protest called last night was "spontaneous", said one of the participants. As the crowd grew this morning, the students urged people across the city to join them in large numbers in a statement. "We the students of TISS, IIT, University of Mumbai etc have actively and successfully occupied the heart of the city at Gateway until we don't know when! We need more representation across student groups/ collectives/ fronts. Please come and join in large numbers with your banners. We need food, warm clothes, newspapers and a lot of you here," read the statement.

Hours after the attack, thousands of students across the country held protests against what they claimed was a brutal crackdown on dissenting voices.

Protests were held at the Aligarh Muslim University in Uttar Pradesh, Jadavpur University in Bengal,  the Film and Television Institute of India in Pune, among other universities.

The attack that comes nearly a month after police clampdown at Delhi's Jamia University has also been condemned by the teachers' association at the university. The Jamia Teachers Association (JTA) accused the administration of collaborating with the masked assailants to "terrorise" students and faculty members.

A day after the attack, the JNU remains tense. Students and faculty members of JNU have alleged that police personnel and private security guards on the campus remained "mute spectators" as the masked assailants unleashed terror on the campus.