"CCTV Video With Cops", Says JNU After Claiming No Footage Of Mob Attack

In a confusing turn of events, responses by Delhi's Jawaharlal Nehru University to RTI queries seeking CCTV footage of the main gate of the campus from January 5 - the day a mob attack left 34 students and faculty injured - appear to contradict each other, raising more questions about what exactly happened on that day and the 48 hours leading up to a rampage by masked goons who entered the campus wielding iron rods and sledgehammers.

In response to a query filed by activist Anjali Bhardwaj - dated January 17 - JNU officials claimed copies of the CCTV footage from the North gate, from 3 pm to midnight on January 5, were unavailable because they were "withheld with law & enforcement agencies for undergoing investigation into recent incidents at JNU".

However, in response to another query - this one filed by activist Saurav Das on January 9 - the JNU administration said "continuous and entire" CCTV footage of cameras at both North and Main gates - from 3 pm to 11 pm on the day of the attack - was unavailable.

The response to Mr Das's RTI query also said "None" in answer to the question: "Whether any vandalisation incidents of the North/Main gate server room where CCTV cameras installed... were recorded since December 30, 2019 and January 8, 2020". 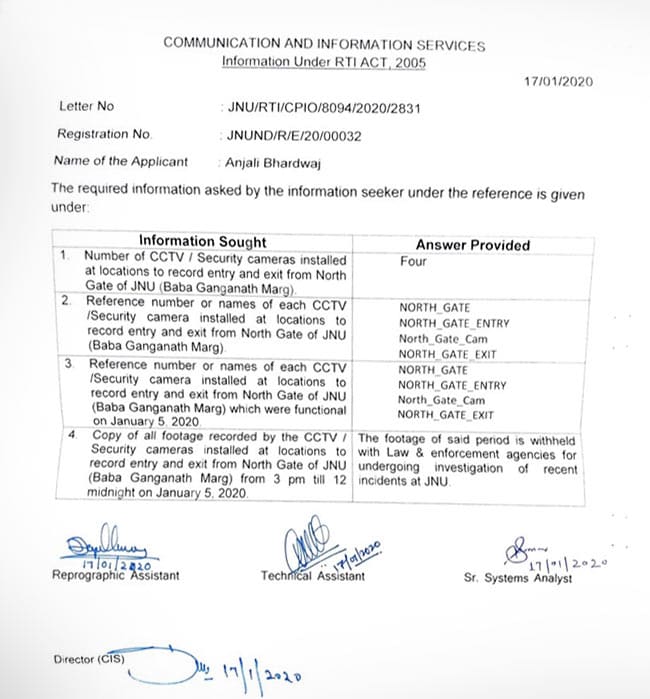 The apparent contradiction in these two responses is made stranger still by Delhi Police's earlier claims that there was no CCTV footage available to identify the mob attackers; the cops cited an attack on the university's server room as explanation

Interestingly, after the attack the cops admitted to difficulty in identifying those responsible, citing the lack of security footage and authenticated video recordings; they claimed, instead, to use screenshots from viral social media posts. 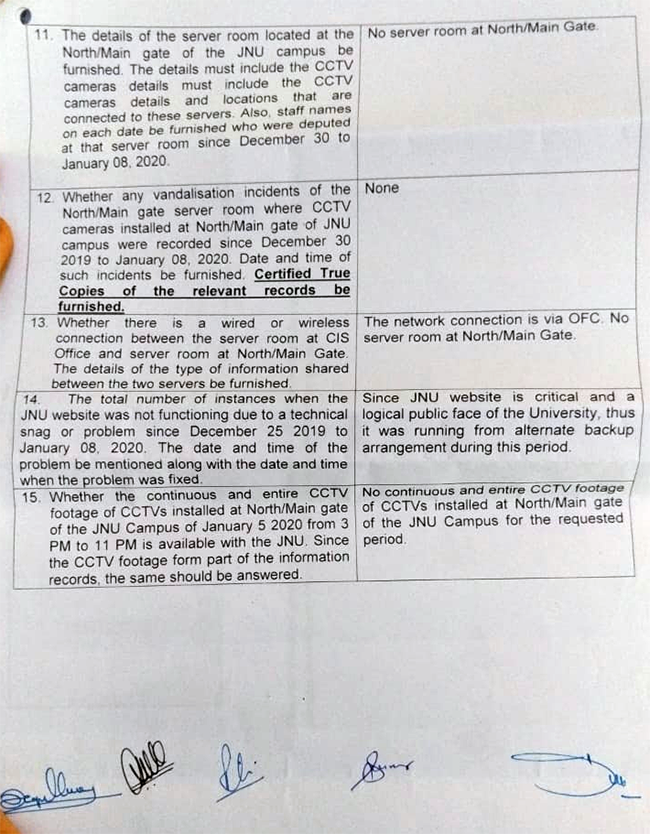 Late in the evening on January 5 between 70 and 100 masked goons, wielding iron rods, sledgehammers and broken glass bottles, barged on to the 1,000-acre JNU campus and went on an unchecked three-hour rampage injuring 34 students and faculty members.

A statement issued by JNU after the attack pinned the blame on Left-backed students opposing the contentious hostel fee hike. The university claimed that "a group of students... entered CIS premises... forcibly evicted technical staff and made the servers dysfunctional".

The servers were allegedly damaged twice - once on January 3 and again the following day.

The university claimed that because of the attacks on the server room CCTV footage from the two gates on the day of the mob attack had not been recorded.

Two days after the mob attack - for which Left-backed student groups and the ABVP, a BJP-linked student group have blamed each other - it emerged JNU had filed FIRs against students' union leader Aishe Ghosh and others for allegedly vandalising the server room; they were filed at 8.39 pm and 8.43 pm on January 5 - around the time Ms Ghosh was being attacked.

In the FIR the JNU administration claimed students who had vandalised the CIS premises had switched off the power supply, thereby causing servers to shut down and affecting a range functions, including CCTV surveillance. 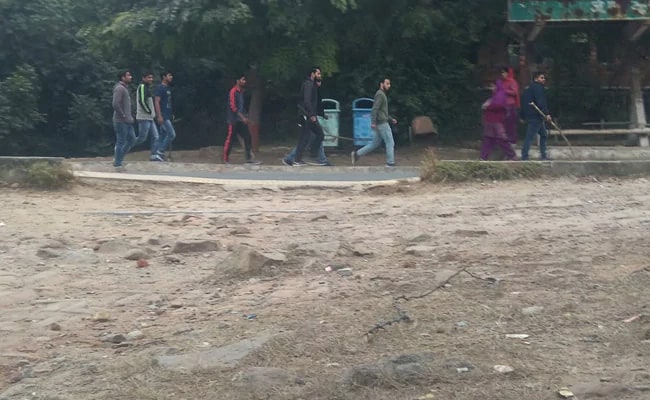 A photograph of some of the alleged mob attackers entering JNU

The apparent confusion over the condition and whereabouts of CCTV footage from the time of the attack, if it is available, adds to the many questions about the attack that remain unanswered, including the role of the Delhi Police.

Criticised for their conduct - Saket Moon, a students' union official, claimed "police had been in the campus since afternoon but did nothing", the cops reacted by filing a single FIR in the case.

Delhi Police have also yet to make any arrests in connection with the January 5 violence, although they have questioned suspects - including Ms Ghosh - over the alleged server room vandalisation.

The fact street lights were switched off during the attack has also been flagged. This is not the first time this has happened in incidents involving JNU students.

In November last year street lights in South Delhi were switched off before Delhi Police allegedly lathi-charged students protesting the hike in fees.