In a statement, signed by the University's Registrar and tweeted by the Vice Chancellor Mamidala Jagadesh Kumar, JNU says the clash was triggered by students opposing the semester registration. 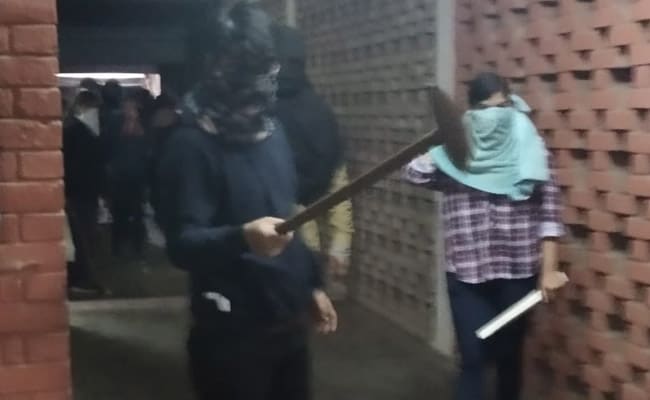 "The JNU administration strongly condemns any form of violence in the campus," the statement read.

The Jawaharlal Nehru University has strongly condemned the violence on campus on Sunday evening, in which "masked miscreants" carrying sticks and rods went on a rampage in hostel rooms. In a statement, signed by the University's Registrar and tweeted by the Vice Chancellor Mamidala Jagadesh Kumar, JNU says the clash was triggered by students opposing the semester registration.

Following is the full text of the JNU's statement on the violence on campus:

It is unfortunate that violence took place in JNU campus this evening. The JNU administration strongly condemns any form of violence in the campus.

Around 4.30 PM, a group of students, who are against the registration process moved aggressively from the front of the admin block and reached the hostels. The administration immediately contacted the Police to come quickly and maintain law and order on the campus. However, by the time police came, the students who are for the registration were beaten up by a group of agitating students opposing the registration.

Some masked miscreants also entered the Periyar hostel rooms and attacked the students with sticks and rods. Some of the security guards doing duties at these places were also badly injured.

During the last couple of weeks, these agitating students also vandalized the admin block and ransacked the office of the Vice Chancellor for which a few police complaints were filed.

It is unfortunate that a group of students with their violent means of protests are preventing thousands of non-agitating students from pursuing their academic activities. The JNU administration stands by every students who wants to continue their academic programs peacefully in the campus.

The JNU administration feels great pain and anguish for the students who have sustained injuries in this violence. JNU is always known for peaceful and democratic protests. JNU administration will not tolerate any form of violence on the campus. A police complaint is being filed to bring the culprits to book. The violators of University rules who are trying to disrupt the peaceful academic atmosphere of the campus will not be spared.

JNU administration appeals to all the stakeholders of the University to maintain peace in the campus and do not get provoked by any misinformation.