Shivani Khot, 19, and her 14-year-old sister Esha have come up with a unique solution - adding a new "blue" signal along with the red, yellow and green ones that people are familiar with. 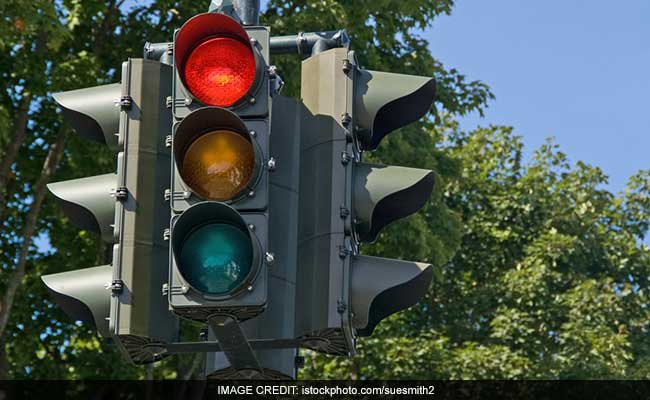 Only 20 per cent of motorists switch off the ignitions while waiting at signals, according to study.

Mumbai: Seldom do motorists switch off their engines at signals, leading to fuel wastage and a rise in air pollution in and around the busy traffic junctions.

In order to address this peculiar problem, 19-year-old Shivani Khot and her younger sister Esha (14) have come up with a unique solution - adding a new "blue" signal along with the red, yellow and green ones that people are familiar with.

As per their novel initiative, all the engines have to be compulsorily switched off at the blue signal.

The blue light will turn on five seconds after a signal goes red and turn off to red five seconds before the green signal, allowing for time to switch on the ignitions.

"There is a huge loss of fuel and air pollution as the engines continue to be on at signals. We think we can change things by having the new signal," Shivani Khot, a student of psychology at the SK Somaiya College in Mumbai, told PTI.

Citing findings of studies done by the Central Road Research Institute (CRRI), she said only 20 per cent of motorists switch off the ignitions while waiting at signals.

She said by switching off vehicle engines, fuel worth Rs 70 crore can be saved annually at eight busy intersections in the national capital region alone.

At these eight junctions, around 28,750 tonnes of carbon is emitted, which can be considerably reduced, only if the engines are switched off, she said citing the CRRI data.

The college student said despite some signals having a digital counter, which shows the time before the signal goes green, there has been no change in the people's attitude.

She said a placard campaign asking motorists to shut engines took the number of those switching off ignition up to 64 per cent, from where it declined week after week.

Shivani Khot, whose father serves as an assistant commissioner of police in Mumbai, said the need to do something for the traffic woes arose from her personal experiences.

In late 2016, the sisters first thought about the 'blue signal' and got it patented.

After more research on the subject, they went public with it and won a number of competitions, including at the University of Mumbai and IIT-Bombay's Techfest last December, where they garnered laurels in the sustainability challenge.

Promoted
Listen to the latest songs, only on JioSaavn.com
At present, the sisters are in the national capital, exhibiting their project at the auto show after being selected by the Automotive Research Association of India to showcase their work.

Asked if legislative changes will be required for better results of their initiative, which is yet to be piloted, Shivani Khot said driving the change is possible through various means, including laws and also technology, as the GPS-enabled systems can automatically shut engines.