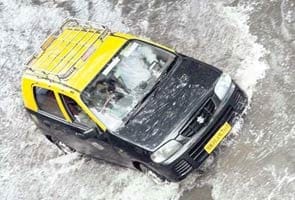 Mumbai: If you've been wondering why your neighbouring taxi or auto stand has been so unpopulated ever since the rains started, we can explain. In the past 10 days, more than 15,000 autos and 12,000 taxis have stayed off the roads. This is to avoid the extra expense they may have to meet if their vehicles get damaged in the rains.

"Due to waterlogging and heavy rains, over 15,000 autos aren't plying," said Sharad Rao, president, Mumbai Auto Rickshawmen's Union. A host of other issues also surface every monsoon, when it comes to city's transportation. Union members claim that of the 1.04 lakh rickshaws plying in the eastern and western suburbs of the city, close to 34,000 are on dead permits which means that permit holders have died, and the names have not been transferred to their kin legally. This leads to the menace of illegal rickshaws on the streets. Most rickshaw drivers also refuse to drop passengers to their destinations, especially in narrow bylanes. "The waterlogged areas generally affect the brakes and other parts of the rickshaw. Thus drivers refuse to ply," explained a union leader.

Even the number of taxis plying on the road has fallen drastically. "Due to heavy rains, nearly 12,000 taxis are not plying," confirmed A Quadros, taxi union leader. Many taxi drivers who drive newer models such as Santro, Omni find it difficult to get spare parts. BEST buses have also been struggling to maintain services, often seen stranded in waterlogged areas of Parel, Hindmata, Malad and King's Circle.

Promoted
Listen to the latest songs, only on JioSaavn.com
Sources said that over 13 buses have been affected due to heavy rainfall the city witnessed in the last few days. "Presently all buses are plying and there are no issues with buses due to rains," said OP Gupta, General Manager, BEST. Officials said that in case of minor problems, the emergency breakdown vehicle is capable of making minor repairs within a couple of hours. If the problems are of a serious nature, the bus is towed to the nearest bus depot.