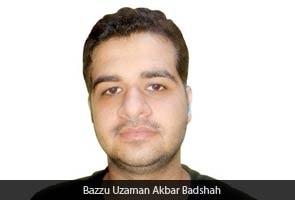 Mumbai: While many faceless, nameless women are sure to have been through the torment that this 22-year-old girl was subjected to, few have lived to tell the horrifying tales of their ordeal.

Sarita Sharma (name changed) is one of the few lucky survivors who have been to hell and back; after being tortured, abused, abducted by her husband, she was slashed with a blade all over her body, continuously, for nine long days.

Friendship request
According to the police, the accused in the case Bazzu Uzaman Akbar Badshah alias Suka alias Pasha (23) is a resident of Adamjee Jivajee Chawl in Sewri, while Sarita lives in Mulund (West).

Their ill-fated romance began in the virtual world, when Pasha befriended Sarita on Facebook in February, and wooed her aggressively. The young girl fell for his charms, and took a hasty decision that would cost her dearly. Weeks after their online romance had begun, they wed each other at the Bandra family court.

Troubled times
Sarita's conjugal bliss was short-lived. Soon, Pasha bared his uglier, more real side to his wife. She felt the first tremors in the relationship when he started tormenting her over her religion. Her suspicions of having been cheated were confirmed when she discovered that his claims of owning an import-export business were elaborate fabrications. He had also lied about being a graduate, having dropped out of school in Std IX.

Pasha's menacing behaviour was soon extended to Sarita's family, whom he started threatening and abusing. On April 14, a traumatised Sarita finally decided to turn things around, and lodged her first complaint - a non-cognisable (NC) one - in Mulund police station. Discord erupted between the couple, and on May 29, the two divorced, in the presence of a qazi and several relatives. However, the divorce was yet to be formalised in a court of law, and Pasha's abusive ways continued. On June 16, an increasingly despairing Sarita registered her second NC in the police station.

Abducted
Finding it difficult to accept that the two had parted ways, Pasha started making desperate attempts to meet her. Sarita ignored his overtures. Outraged at the slight, Pasha plotted revenge. On June 17, while Sarita was on her way to Nirmal Lifestyle, Pasha ambushed her and took her to his residence in Sewri, where he held the girl captive for days.

Having ensnared his victim, the diabolical man gave free rein to his sadistic urges, assaulting her with kicks and punches. Any attempts made by Sarita to defend herself infuriated him, and soon he found a new weapon of torment - a razor blade. Over the next nine days, the fiendish man subjected Sarita to unspeakable torment, slashing her all over her body, slashing her face, neck and arms with the blade, leaving a mesh of about 100 surface injuries on her skin. Her agonised screams frightened Pasha, who took her to a private clinic in his vehicle - but not before trying to stage Sarita's suicide.

En route to the clinic, Pasha clicked pictures of Sarita's wounds using his camera phone, and forwarded them to Sarita's sister. He sent an accompanying message, making it sound like Sarita had written it. The SMS gives a clear picture of his intentions, saying: 'Listen don't ever call on this number. Don't show these pictures to jiju [brother-in-law] as well. But show mom and dad. I love you all. Giving my life now. Bye forever. Don't lodge any complaint against anyone. I love you all." Cops investigating the case suspect that this was Pasha's first step in staging his wife's suicide.

Sarita received treatment at the clinic, after which Pasha took her back home to subject her to more violence. Surprisingly, not a single member of the attending staff reported Sarita's tell-all injuries at a police station.

Sarita's ordeal continued. Thinking of new ways of tormenting his partner, Pasha threatened to falsely implicate her in a case under the Maharashtra Control of Organised Crime Act (MCOCA). Her spirits flagging, Sarita started contemplating suicide at this point. Pasha also bullied her into telling her parents not to lodge a complaint against him.

The great escape
An opportunity to flee this private hell presented itself to Sarita on June 26, and desperate for freedom, she seized it. Her first step was to complain to several police authorities through her lawyer Satyam Dubey. On July 3, the police registered an FIR against Pasha and two others. He was arrested and produced at the Mulund court yesterday, where he was remanded to police custody till July 14.

"We have arrested Pasha under a slew of sections of the IPC -- 323 (hurt), 324 (hurt by dangerous weapons), 341 (wrongful restraint), 342 (wrongful confinement), 366 (kidnapping, abducting or inducing woman to compel her marriage), 387 (putting person in fear of death or of grievous hurt, in order to commit extortion), 506(2) (criminal intimidation), 34 and sections three and 25 of the Arms Act," said JJ Jadhav, senior inspector, Mulund police station.

History of crime
During interrogations, Pasha confessed that his father is an accused in the 1993 Mumbai blast case. A history sheeter, 16 criminal cases have been registered against him in the past, 13 of them in the RAK Marg police station. Police have recovered three weapons from him. He was in the 'business' of lending money.

"Sarita was brutally thrashed, and attacked with a blade on her face, hand and body," said Dubey.

Promoted
Listen to the latest songs, only on JioSaavn.com
Sarita, who is still in shock from the trauma of her hellish experiences in captivity, refused to comment on her ordeal.