The mother and the child are said to be fine and were taken to a hospital immediately after the delivery. 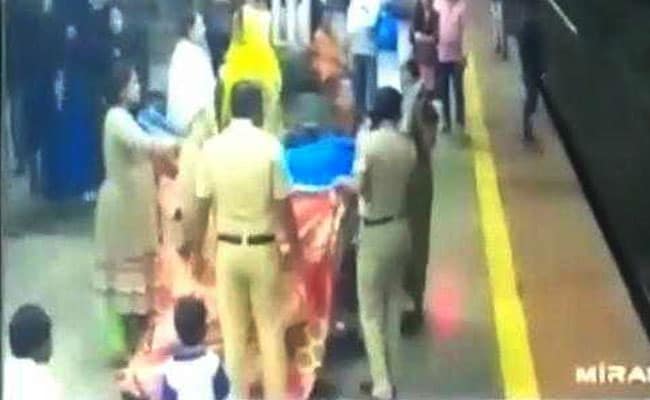 The Dadar station platform was turned into a makeshift labour room to help the woman deliver the baby.

A 21-year-old woman gave birth to a baby on the platform of a busy railway station in Mumbai on Christmas Eve. On the evening on Decemebr 24, Geeta Deepak Wagare and her husband were at the Dadar station, waiting for a train to Pune. As they waited, she went into labour.

CCTV visuals from the platform shows the woman lying on the floor of the platform, with her husband sitting next to her. A couple of police personnel and travellers can be seen standing around them as the woman lies in pain.

In no time, three women, including a police official, created a makeshift 'labour room' by holding up two bedsheets to cover Ms Wagare as she delivered the baby.

The mother and the child are said to be fine and were taken to a hospital immediately after the delivery.

In a similar incident in September, a 27-year-old woman gave birth to a baby on a platform of Bhusawal railway station in Jalgaon district of north Maharashtra. According to railway officials, the woman, Kanchandevi, who was travelling from Mumbai to Lucknow in Pushpak Express, started experiencing severe labour pain as soon as the train arrived at Bhusawal station. The woman delivered the baby on the platform before other passengers could take her to the railway hospital.

A 30-year-old woman delivered twins inside a train at Kalyan station near Mumbai in July. Salma Tabassum delivered a twin boy and girl in the presence of the station manager, a central railway medical team and railway police officials. Ms Tabassum went into labour soon after she had boarded the train early in the morning.