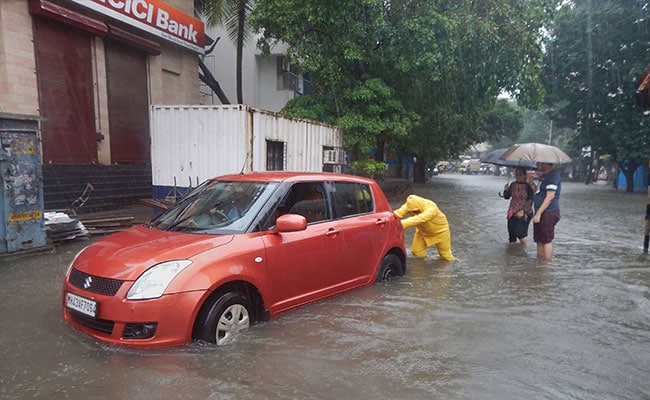 Mumbai and the coastal Konkan region continued to experience heavy rains on Sunday with the Central Railway services hit on various sectors and boats were deployed to rescue around 400 people stranded in the Kurla suburb, officials said.

In Church Road-Dahanukarwadi areas of Kandivali, some locals made temporary rafts of wooden board to ferry people to nearby areas for replenishing stocks of essentials.

Around 35 people of the tiny Ju village in Thane have been stranded due to rising flood waters and the state government has requested an air rescue operation for them.

They have been temporarily shifted to Bazarwad Municipal School and arrangements made to give them food, water and medical help as required, said the BMC Disaster Control.

In some villages in Pen, Raigad district, around 60 people were stuck in five-six feet deep water since 4 a.m. on Sunday, and the authorities have deployed NDRF teams to rescue them.

The downpour, which revived with full intensity since Friday night, continued Sunday with many areas of Mumbai, Thane, Palghar, Raigad and Ratnagiri remaining submerged, hitting normal life and road traffic.

Barring delays, the Western Railway services continued, but CR services were hit in some sectors like Kurla-Sion due to waterlogging on tracks, breaches in railway lines, landslides on outstation routes. Its suburban Harbour Line was also paralysed.

Mumbai is likely experience a 4.86 metres high tide at 2.29 p.m. on Sunday, with the IMD and BMC Disaster Control warning people to keep away from coastal areas and beaches in the city.

The BMC, Indian Army, Navy and Air Force, besides all other agencies, are on a high alert for any eventuality.

A portion of a bridge on Pinjal river in Palghar was washed away, bringing traffic to a complete halt on both sides.

Subways in Kandivali, Malad, and Andheri were flooded hampering traffic movement in the east-west directions.

However, most flights were operating at Chhatrapati Shivaji Maharaj International Airport with delays of around 30 minutes, said officials.

The BMC's rain monitors pegged the figure at 116 mm for Mumbai city, 195 mm for the eastern-western suburbs.

The BMC Disaster Control have asked people to keep away from all seafronts for the next two days as extremely heavy rains are forecast.