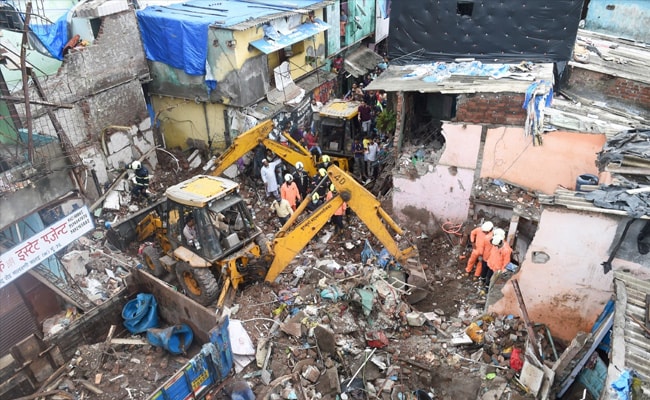 Rafique Sheikh is too dazed to comprehend whether to thank his luck for surviving after the Mumbai building where he stayed collapsed or to mourn the loss of his wife and eight other family members in the tragedy.

Eleven people, including eight children, were killed and seven others injured after two floors of the three-storey building collapsed on a single-storey house in Malwani area late Wednesday night.

Mr Sheikh (45), who was staying on rent along with his family members in the ill-fated building, had stepped out to buy milk minutes before it collapsed.

When he came back, he found his world turned upside down as nine members of his family, including his wife, brother, sister-in-law and six children from the two families, died in the incident.

Another family member received injuries after getting trapped under the debris and was hospitalised, Sheikh told reporters.

He is now left with his 16-year-old son, who also had a miraculous escape as had gone out to buy some medicine when the tragedy struck.

"I had gone out to buy milk for morning tea when the incident took place. I never knew the building was in a bad condition. My family members did not get any time to move out from the house when the building collapsed," he said.

Sheikh said when he returned, he saw a number of locals removing the debris from the spot before the rescue teams arrived.

Meanwhile, a local resident claimed most of the shanties in the area were set up illegally and later converted into three to four-storey structures without any permission from the civic body.

Most of the shanty owners live elsewhere and have rented out their premises here to poor people, he said.

The three-storey building collapsed around 11.15 pm on Wednesday at the New Collector Compound on Abdul Hamid Road in the Malwani area, civic officials earlier said.

During cyclone Tauktae last month, the building suffered certain damages, he said, adding that Wednesday's incident could have been averted if proper precautions had been taken.