The snake was spotted in the 8.33 a.m. Titwala-Chhatrapati Shivaji Maharaj Terminus local train when it was reaching Thane station. 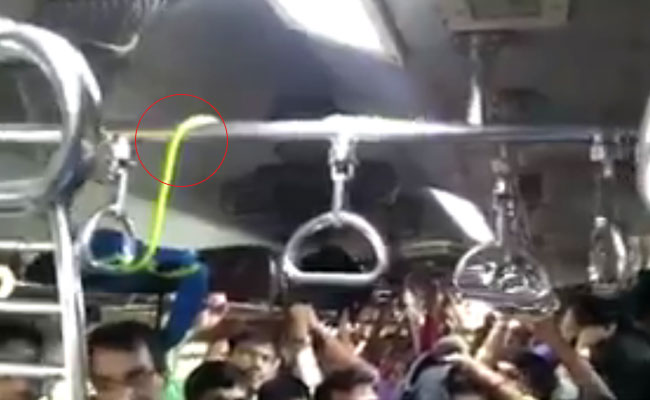 The green snake had entwined itself on the overhead handle bars in the train.

The green snake had entwined itself on the overhead handle bars on which commuters usually hang on to in the suburban trains.

The snake was spotted in the 8.33 a.m. Titwala-Chhatrapati Shivaji Maharaj Terminus local train when it was reaching Thane station.

Chaos broke out as the commuters attempted to get away from the snake in an already choked compartment. Many screamed, demanding that the railways and police be alerted.

The train was halted at Thane station and the scared commuters tumbled out of the compartment before some police and rail officials managed to catch the snake and take it away to safety.

The relieved commuters barged into the compartment again with many still casting anxious glances upwards to ensure there were no other reptiles around.

Because of the incident, several local trains were delayed in the morning peak hours as the videos and pictures of the snake shot on the train went viral.

Central Railway chief spokesperson Sunil Udasi suspects it to be a case of mischief played by someone. The Railway Protection Force is attempting to track the culprits.

"This rake had already completed two trips earlier and was on its third trip without any untoward incident. We are scanning all the videos and pictures to ascertain how the snake emerged suddenly at such a height," Mr Udasi told

Comments
Mumbaisnake in a train