Dev Anand treated me like his son, says cop 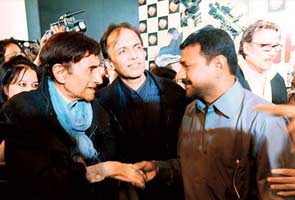 Mumbai: For Police Inspector Sachin Sawant the demise of Dev Anand is a personal loss, as Dev Sahab was no less than a father to him, he said. Sawant who co-owns a bungalow in Mahabelshwar with the actor said that he was unable to come to terms with the reality. Sawant said, "Dev Sahab's personal assistant had called me up to check if the news was true. I immediately contacted the actor but his cell phone was switched off, I then called Dev Sahab's son Sunil." Dev Anand's daughter Mona will by flying to London to be with her brother, the inspector added.

Sawant who is in-charge of Anti Extortion Cell of Crime Branch told MiD DAY, "Dev Sahab treated me like his son. He had plans of returning to Mahableshwar on December 17 to spend some time at our bungalow. He had asked me to take leave to spend some time with him."

The bond between Sawant and Dev Anand dated back to 1984, when he was posted as Sub Inspector at Malad police station.  "I was introduced to the Dev Sahab through a friend, from then we were constantly in touch. Our relation blossomed when I was posted in Mahableshwar in 2007," he said.

Promoted
Listen to the latest songs, only on JioSaavn.com
Sawant recalled how the actor had interacted with his two daughters with great simplicity. "He even remembers their birth dates and tried to come to greet them. Dev Sahab also stayed with us at my government quarters without bothering about the lack of facilities," the inspector said.

Sawant, an actor himself, has worked in many serials and Hindi films. "Dev Sahab insisted that I play a part in his last movie Charge Sheet. I had played the role of an upright Inspector named Sachin Vyas." He added, "Dev Sahab was a great person and director. He had immense talent and with utmost ease he could to explain it to new actors."

Great actor
Sawant narrated a scene in the film Charge Sheet, where Dev Anand had to give a shot from the top of the old Shree Kshetra Mahableshwar Temple at the height of 70 feet. Sawant said, "Dev Sahab had to fire from that point. But even at the age of 86 he confidently completed the shot. Co-actors Jackie Shroff, Milind Gunaji and I were moved with his great acting skills."