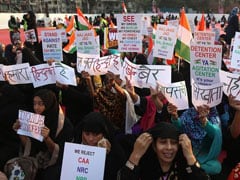 The women have been protesting since January 26.

Taking a cue from Shaheen Bagh protests, at least 100 women in south Mumbai's Nagpada area have launched a sit-in protest against the controversial Citizenship (Amendment) Act.

The women who have been protesting since January 26 night against the CAA-NRC-NPR regime, on Tuesday vowed to hold their ground like their Shaheen Bagh counterparts in Delhi who have been sitting on protests for more than a month.

Traffic in the Muslim-dominated area is not much affected, as the protesters are occupying a side road outside a hotel.

Most of the women are residents of Madanpura, Jhula Maidan, Agripada and Mumbai Central areas.

Feroza Mithiborwala of ''Hum Bharat Ke Log'' told PTI that the women are firm to continue their protests.

"Women from the Muslim community have been feeling frustrated since the last six years. It is this frustration that women are coming out to protest," Ms Mithiborwala said.

One of the speakers, Nagma Siddique, criticized the Uttar Pradesh Police and Chief Minister Yogi Adityanath and told the gathering that the protest was like a "festival" for them.

"If anyone visits your home asking for your documents, than respond by demanding Rs 15 lakh from them," Siddiquie said in an apparent reference to the BJP's pre-2014 poll promise.

One of the protesters said the women are balancing their responsibilities at home while also participating in the protest. They go to their respective homes in batches and return to the spot after dropping their children at school and completing other work, she said.

Local police's efforts to break the protest are not successful yet.