Mumbai Warned Of Traffic Jams Ahead Of Mega BJP Event

BJP Foundation Day: BJP President Amit Shah will address around 3 lakh party workers at the event who are expected to come in from across the state. 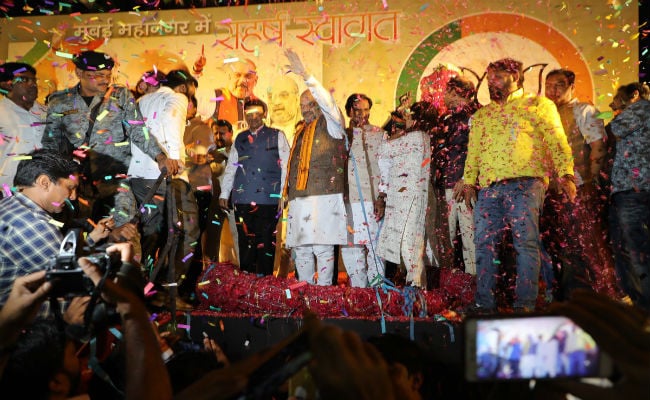 Mumbai: Residents of Mumbai will have to brace for massive traffic jams ahead of the BJP's foundation day celebrations planned at the MMRDA grounds in Bandra Kurla Complex in the heart of the city today. BJP President Amit Shah will address around 3 lakh party workers at the event who are expected to come in from across the state. The event will be a show of strength for the party, and the BJP has booked 28 trains from across the state, as also 50,000 private buses and vehicles for transportation.Mr Shah arrived in the city on Thursday evening and was welcomed by BJP cadres who organised a bike rally bringing traffic to a standstill on the arterial Western Express Highway, a road that connects the Mumbai's western suburbs to the city.

Actor Amitabh Bachchan was among those who was in traffic on Thursday evening.

Several Mumbaikars who missed their trains or flights vented their frustration on Twitter.

Heavy traffic jam near D Airport due to BJP rally.. Mr CM hv u inform people in adv abt this inconvenience ?? Missed my train @Dev_Fadnavis

Promoted
Listen to the latest songs, only on JioSaavn.com
"Students appearing for exams and commuters going towards airports/railway stations may plan in advance and travel as per advisory," the advisory added.

After the Janata Party dissolved in 1980, the members of the erstwhile Jana Sangh reconvened to form the BJP in its current avatar. The BJP held its first conclave at Bandra Reclamation in Mumbai. Former Prime Minister Atal Behari Vajpayee, in his speech at that venue, had said the much quoted words, "Andhera Chatega, Suraj Niklega, Kamal Khilega" which when translated means, "The darkness will disappear, the sun will rise, the lotus will bloom". The lotus is the symbol of the BJP and the party faces an electoral challenge in 2019 after a historic victory in 2014 under Narendra Modi, when it won a majority on its own with 282 seats in the Lok Sabha.