The woman lawyer, who met reporters at the police station on Wednesday, alleged that it was the BJP councillor's men that hit her car and gave her death threats, telling her to take back the complaint against him. 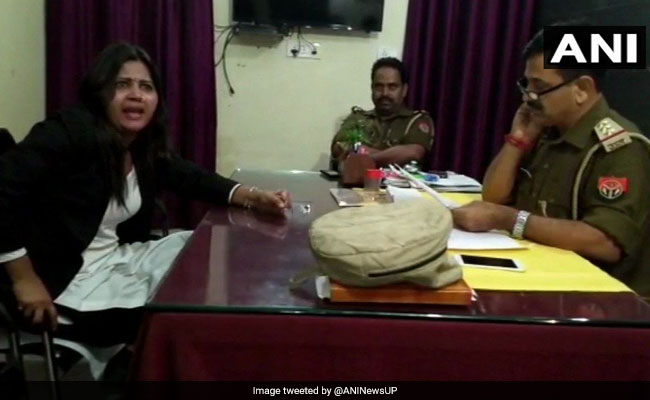 A woman advocate and her "drunk" friend - a cop - who was allegedly thrashed by a BJP councillor for misbehaving at his restaurant by pointing a pistol at his staff, landed in another controversy on Wednesday after she drove her car rashly, hitting at least four vehicles in Meerut.

Meerut (City) Superintendent of Police Ran Vijay Singh told news agency PTI that the advocate, Dipti Chudhary, has been charged with rash and negligent driving and misbehaving in a public place. As per procedure, she was sent to the district hospital for a medical examination to determine if she was under the influence of alcohol.

Police said Ms Chudhary was "drunk" when she drove her hatchback mindlessly from Kutchery to Boundary Road in Meerut, hitting two other cars and as many motorcycles.

The police, who reached the spot of the accident soon after, said "When Dipti (Chudhary) was taken to the Lalkurti police station, she misbehaved with the officials and created a ruckus there." 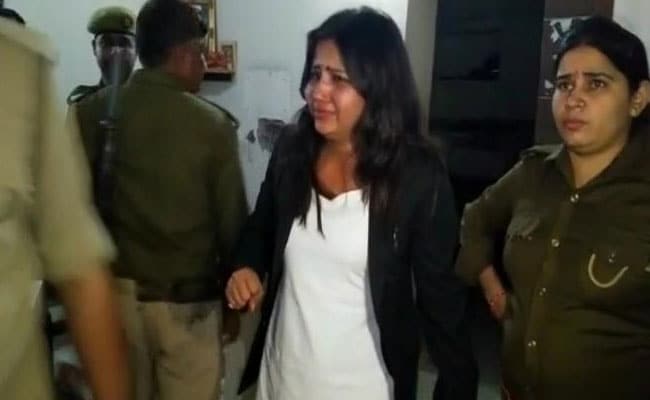 The police said that the woman, a lawyer, misbehaved at the police station after being charged for reckless driving

Negating the accident, Ms Chudhary accused the police inspector of "acting on orders from the BJP."

On October 20, Dipti Chudhary had filed a complaint against BJP councillor Manish Kumar for "hitting her and her police sub-inspector friend at his restaurant" the previous day. The incident was recorded on a cellphone camera.

Based on the woman's complaint, and supporting "video evidence", the police had arrested BJP councillor Manish Kumar on October 20.

On October 19, A "drunk" policeman, in uniform, had accompanied the woman lawyer to a restaurant in Meerut, where they reportedly had an argument with the staff over delay in serving food. In a cellphone video of the incident, shot by one of the staff members, the woman can be seen holding a pistol, abusing and threatening the owner.

Circle Officer at Daurala Pankaj Kumar Singh confirmed that the trigger for the October 19 incident was the woman expressing displeasure over not getting their order on time. She allegedly threw away the food when it was finally served.

Ms Chudhary had alleged that she was harassed and beaten up by the BJP councillor, the police said.

According to news agency PTI, the woman lawyer, who met reporters at the police station on Wednesday, alleged that it was the BJP councillor's men that hit her car and gave her death threats, telling her to take back the complaint against him.

Police are investigating the matter.