UP Minister, 5 Others Booked for Allegedly Burning Journalist to Death 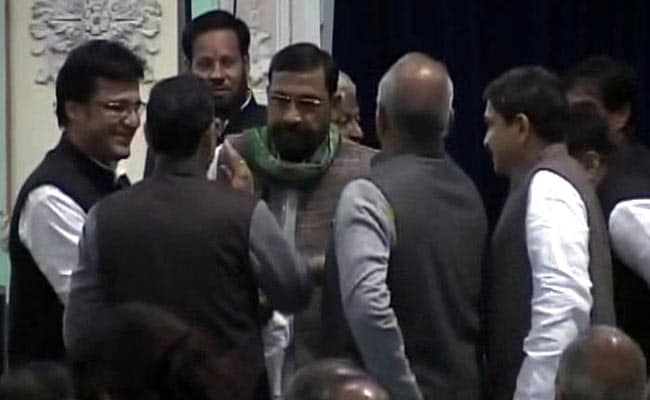 An FIR has been registered against Minister for Backward Classes Welfare Ram Murti Singh Verma (C).

Lucknow, Uttar Pradesh: Uttar Pradesh Minister Ram Murti Singh Verma has been booked along with five others in connection with the killing of a journalist by allegedly setting him on fire in Shahjahanpur district.

The FIR has been lodged under IPC 302 (murder), 120 B (criminal conspiracy), 504 (intentional insult with intent to provoke breach of the peace) and 506 (criminal intimidation).

The FIR was registered at the Puwayan police station on Tuesday afternoon on the basis of a complaint by Jagendra's son Raghvendra after the journalist died during treatment at a hospital in Lucknow on Monday night, police said.

According to the family members of the deceased, Jagendra had made a Facebook post against the minister regarding his alleged involvement in illegal mining and land grabbing.

The family alleged that during a raid at the journalist's house at Awas Vikas colony in Sadar Bazar area of Shahjahanpur on June 1, he was set on fire, following which he was taken to a hospital in Lucknow.

Before his death, Jagendra had accused Ram Murti Singh Verma of "unleashing" a reign of terror on him and his family for his investigative reports and comments against the minister.

The journalist had alleged earlier that he sustained burn injuries during a raid by Inspector Sri Prakash Rai at his house.

He reportedly told Inspector General (Civil Defence) Amitabh Thakur two days ago at the civil hospital in Lucknow that he was also attacked on April 28 near his house by the minister's henchmen but no action was taken in the case.

"He told me he was hounded for exposing the ministers alleged involvement in illegal mining and forced occupation of land," Mr Thakur said.