'Kiss of Love' Given From Kerala to Kolkata 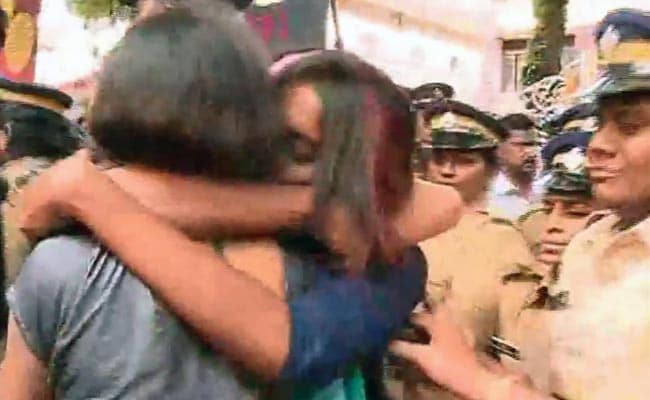 The 'Kiss of Love' protesters expressing their feelings before the police carted them away in Kerala.

Kolkata: After Kerala, it is the turn of West Bengal to host the "Kiss of Love", when youngsters in the state capital Kolkata will indulge in public display of affection on Wednesday as a mark of protest against moral policing.

In solidarity with those who courted police action during the "Kiss of Love" in Kochi on Sunday, students of India's prestigious Jadavpur University will organise a similar event in south Kolkata.

"We are protesting against the organised instances of moral policing. Interested citizens are welcome to join us," university student Nabottama Pal told IANS.

"From Kochi to Kolkata, instances of moral policing are not rare. A saffron wave is slowly but surely engulfing the country -- be it through accusations of conducting 'Love Jihad' for loving a person from a different religion or attack on young people displaying affection."

Pal said students will form a human chain and walk from the university premises to finally engage in "kissing, hugging, showering affection on each other through whichever way we feel comfortable and consent to" in the Jadavpur police station area.

They will then move on to 8B bus stand opposite the university campus to discuss the need for the protest and "to publicly discuss our stand against moral policing and why we think it is wrong".

Pal said they would also raise their voice against a recent incident where the authorities of a cinema hall allegedly harassed a girl on the grounds that she was wearing a knee-length skirt, which according to them was indecent.

A similar event has been planned by Presidency University students at 2 pm on Wednesday near their campus.

Promoted
Listen to the latest songs, only on JioSaavn.com
"Kiss of Love" was meant to protest against the recent attack on a cafe in Kozhikode after a TV channel showed young men and women hug and kiss during their visits to the outlet for snacks.

Though police whisked away the protesters, some of them hugged and kissed each other.