In a CCTV footage, Sri Lankan national Sasikala is seen going inside the temple with the irumudi kettu or offerings kit on her head

The shrine and many devotees have refused to accept the Supreme Court order on Sabarimala. (File)

A 46-year-old woman from Sri Lanka, who entered the Sabarimala temple last night, became the third woman of menstruating age in the temple's history to offer darshan to the shrine of Lord Ayyappa nestled in the Western Ghats, since the Supreme Court ordered the end of a decades-old ban on women of menstrual age entering the shrine.

In a CCTV footage released by police sources, the Sri Lankan national is seen going inside the temple with the irumudi kettu or offerings kit on her head.

Sasikala, a citizen of the island nation, earlier told reporters that she was near the 18 golden steps that lead to the shrine when she was stopped by the police. The police later said she managed to offer darshan.

Ms Sasikala is the third woman of menstruating age to have offered darshan to Lord Ayyappa after Bindu and Kanaka Durga, both in their early 40s, who on Wednesday made history.

Protesters have been targeting women under 50 who attempt the trek to the Sabarimala temple after the Supreme Court's order in September last year. 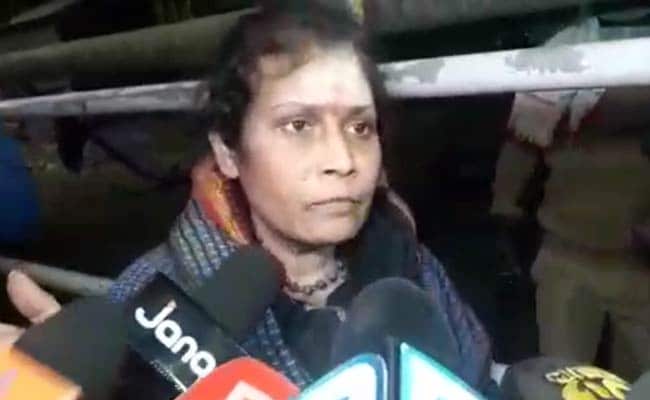 Sasikala, a citizen of the island nation, earlier told that she was near the 18 golden steps.

"I did not get darshan. They did not let me go... I have a medical certificate," Ms Sasikala earlier said, before the police confirmed that she did manage to offer prayers inside the temple later. Her medical papers show her uterus was removed. Ms Sasikala said she has fulfilled every condition needed to visit the temple. "They have a 48-day fasting rule; I have done the 48-day fast."

Both the BJP and the Congress have protested against the state government for allowing the two women inside the temple on Wednesday.

Armed with stones and crude bombs, mobs took to the streets in Kerala during the dawn-to-dusk strike on Thursday, clashing with the police, forcing shops to shut and attacking offices of the ruling CPM and its allies in several districts.

The strike was called by Sabarimala Karma Samithi, an umbrella organisation of right-wing groups, and the Antarrashtriya Hindu Parishad. The opposition BJP supported the strike while the Congress observed a "black day".

BJP Rajya Sabha member V Muraleedharan petitioned Home Minister Rajnath Singh for a detailed probe on the background of the two women and how they entered the temple through a backdoor, helped by the state government.

Kerala Chief Minister Pinarayi Vijayan has said the state provided protection to the two women because it was obeying the Supreme Court's order.

Over 700 people were arrested and 600 were taken into precautionary detention on Thursday.