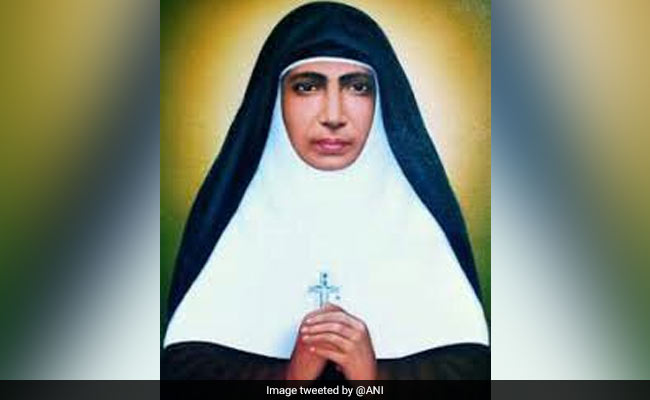 Sister Mariam Thresia will be canonised by Pope Francis on October 13 this year at Vatican.

Kerala's Sister Mariam Thresia is set to be canonised next month, the fourth from the state who will be attaining sainthood, of which two were women.

Sister Thresia will be canonised by Pope Francis on October 13 this year at Vatican.

Sister Thresia founded the Congregation of the Holy Family, which was officially accepted in 1914.

Speaking to news agency ANI, Sister Udaya of the Congregation of the Holy Family said: "In earlier times, there were a lot of restrictions on women in Kerala. They were not allowed to enter another person's house. But Mariam Thresia, born in 1876, was very bold and courageous. The restrictions did not deter her and she continued providing healthcare and educational facilities to people more than 100 years ago."

Following a period of hardship, people started calling her a "woman of grace", said Sister Udaya. "There was a lot of acceptance. Later, the church found that she was genuine and allowed her to start the Congregation of the Holy Family."

"On October 13, we will have a mass and offer prayers at Kuzhikkattussery, where she was buried in 1926," said Sister Udaya.

Prior to this, Vatican had declared three Kerala-born Catholics, including Sister Alphonsa, Sister Euphrasia and Father Kuriakose Elias Chavara, as Saints.

"Joseph Vithayathil, the co-founder of the congregation will also attain it soon," said Sister Udaya.

Since the time Saint Thomas came to India in 852 AD, Christianity has been growing exponentially, she added.

Sister Ruby, from the same congregation, echoed similar sentiments and said, "In Kerala, people have been following the religion for the last 2,000 years when Jesus Christ came to the world along with his disciples. One amongst them came to India and because of that people are living a saintly life here."