Sabarimala Temple: The BJP in Kerala has declared Sunday as a day of protest, a day after a party leader was detained while he was on his way to the hill-top shrine of Lord Ayyappa at Sabarimala. 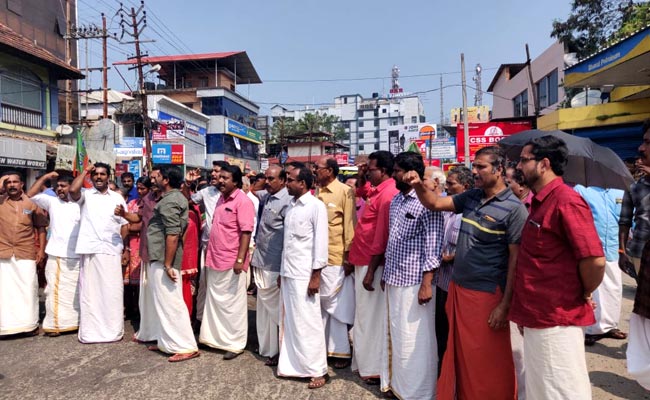 The BJP in Kerala has declared Sunday as a day of protest in another row over Sabarimala.

The BJP in Kerala has declared Sunday as a day of protest, a day after a party leader was detained while he was on his way to the hill-top shrine of Lord Ayyappa at the Sabarimala temple on Saturday. The BJP is blocking highways in Kerala. The Sabarimala shrine of Lord Ayyappa nestled in the Western Ghats opened for the third time on Friday after the Supreme Court in September overturned a decades-old ban on entry of women between 10 and 50 years. The 62-day-long Mandala Pooja-Magaravilaku annual pilgrimage began on Saturday morning amid heavy police deployment. Kerala BJP's general secretary K Surendran and his party workers were blocked at Nilakkal base camp and asked to return. When Mr Surendran refused, he was taken away in a police vehicle. His detention was described as a "preventive measure" by the police.

Here are the updates on the Sabarimala temple issue:

Nov 18, 2018 16:49 (IST)
Spearheading a campaign against the Kerala government over the Sabarimala issue, BJP state unit chief PS Sreedharan Pillai Sunday alleged that the CPI(M)-led dispensation was making the Lord Ayyappa shrine "a centre of dispute to destroy its uniqueness", according to news agency Press Trust of India.
Condemning the police action against "peacefully agitating" devotees, he said the Bharatiya Janata Party (BJP) will extend all possible assistance to the protesters to protect the hill shrine from the "hidden agenda of atheists".

Mr Pillai said the BJP and Sangh Parivar will expand the ongoing agitation against the state government's "hasty move" to implement the Supreme Court verdict, permitting entry of women of all age groups into the temple, to other parts of the country, according to PTI.

"What is going in Kerala (over Sabarimala) is a fight between devotees and atheists," he told PTI.

"BJP workers will continue to join the devotees' protest if any woman in the menstrual age group tries to enter the temple. The devotees have so far succeeded in preventing such women from breaking the custom," he said.

The Kerala BJP unit chief said the government did not permit the Travancore Devaswom Board (TDB), which administers the shrine, to file a review petition against the top court's September 28 order, according to a PTI report.

"It was the Hindu faithful who launched an agitation against the state government. They all hit the streets against the government's move to destroy the unique nature of the temple and Lord Ayyappa faith in the name of the Supreme Court verdict. We just extended our support to them," he said.
Nov 18, 2018 16:26 (IST)
Congress team in Kerala arrives at Sabarimala, demands better amenities
A team of Congress' Members of Legislative Assembly or MLAs demands better amenities in Kerala's Sabarimala.

The lawmakers said that Sabarimala pilgrims are disappointed about amenities and said devotees are declining. Amenities for Sabarimala  devotees ought to be improved, they said. Police Raj at Sabarimala. Government should withdraw police, they said.
Nov 18, 2018 14:24 (IST)
A calm atmosphere at the Lord Ayyappa shrine in Sabarimala marked the second day of the two month-long annual pilgrimage season, even as the rest of Kerala witnessed protests against the arrest of BJP General Secretary K Surendran while on his way to the temple, said news agency PTI. The temple had opened Friday evening for the two-month-long annual pilgrimage season as a stand-off continued over entry of menstrual age women into the shrine.
Nov 18, 2018 13:32 (IST)
A right-wing organisation in Kerala and the BJP blocked the national highway at Vyttila region in Kochi against alleged police atrocities in Sabarimala. 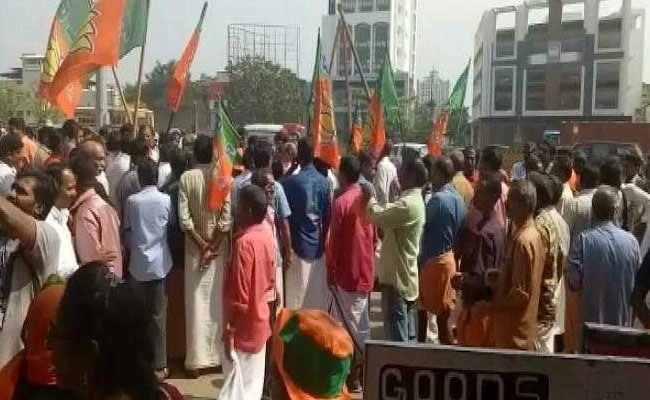 The BJP in Kerala has declared Sunday as a day of protest, a day after a party leader was detained while he was on his way to the hill-top shrine of Lord Ayyappa at the Sabarimala temple on Saturday.

Nov 18, 2018 11:56 (IST)
The Kerala unit of the BJP is observing a protest today by blocking highways across the state following the arrest and the subsequent remand of senior party leader K Surendran. Mr Surendran was taken into custody on Saturday night after he got into a scuffle with the police while attempting to go to the Sabarimala temple despite police cordon in the area. 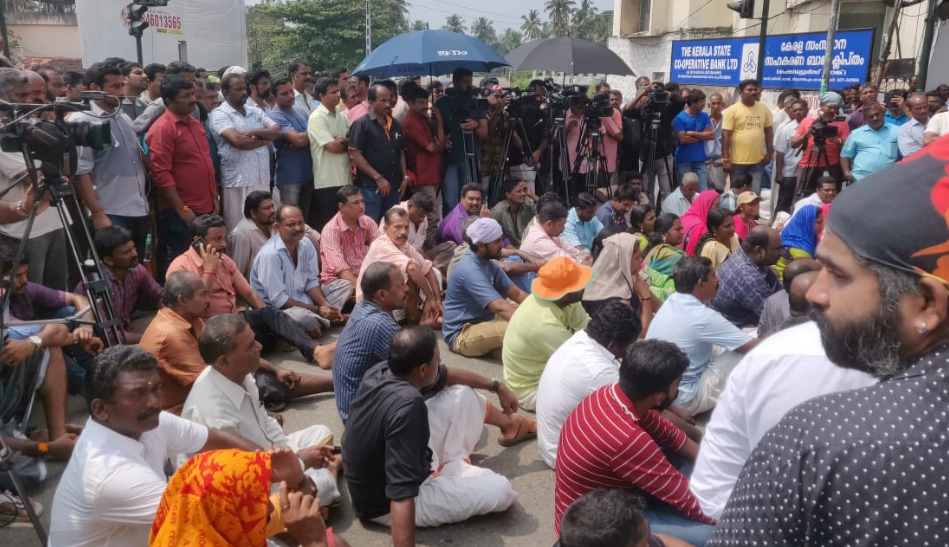 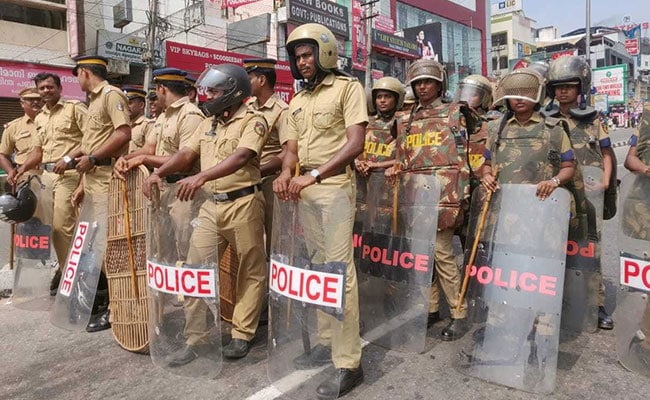 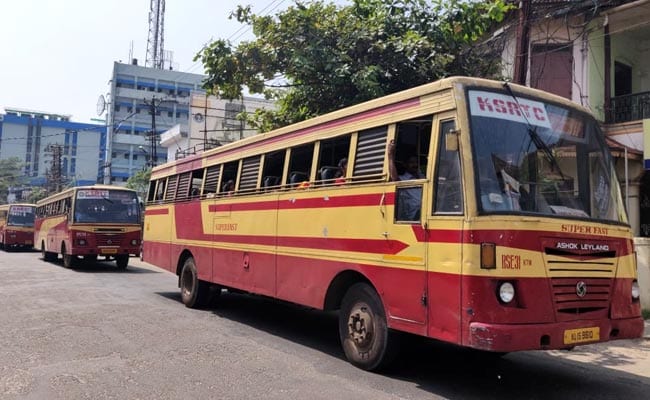 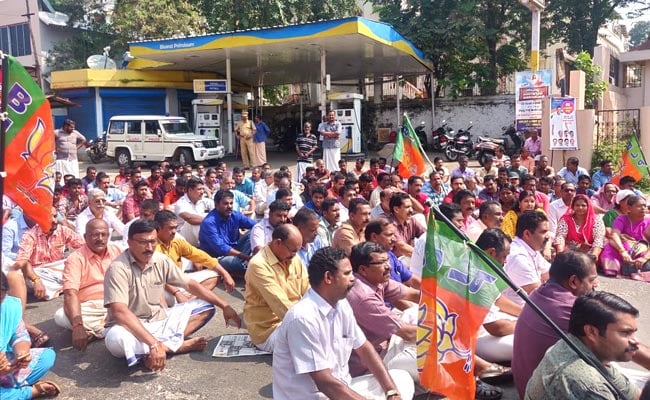 Nov 18, 2018 11:20 (IST)
BJP IT cell head Amit Malviya lashed at Kerala Chief Minister Pinarayi Vijayan over the alleged poor arrangements for Lord Ayyappa devotees in the climb to the Sabarimala shrine. "Pinarayi's government has unleashed unprecedented hardship on Lord Ayyappa's devotees. No place to rest enroute, people have had to sleep next to pig droppings and dustbins, young children and aged suffer as taps run dry, no food, no toilets," Mr Malviya tweeted with #SaveSabarimala. "Do Hindus have human rights?" Mr Malviya added.
Nov 18, 2018 11:13 (IST)
Kerala minister Thomas Isaac said today that K Surendra has "flouted" police arrangements at Sabarimala. "Surendran flouts police arrangements for the security of the devotees and is arrested, like Ms Sasikala... By the grace of the Lord, there is no hartal. BJP will blockade the highways. What devotion!" Mr Isaac tweeted.
Nov 18, 2018 11:00 (IST)
Some 150 BJP workers are blocking a main tri-junction in Thiruvalla town of Kerala despite heavy police presence.
Nov 18, 2018 10:34 (IST)
Two former Congress ministers Thiruvanchoor Radhakrishnan and VS Sivakumar along with another top leader from the party are reaching Nilakkal and are likely to arrive at Pamba by 1pm. The Congress leaders claim that they will be in the area to check the facilities provided for Lord Ayyappa devotees.
Nov 18, 2018 10:27 (IST)
Mr Surendran and the BJP have been up in arms against the Chief Minister Pinarayi Vijayan-led government in Kerala, which according to them, is determined to see that a woman in the hitherto "banned" age group is allowed 'darshan' at the Sabarimala temple and they have vowed that the temple traditions will not be breached. The BJP and the Sangh Parivar forces have decided to strengthen their presence in and around the temple town and have asked its cadres to arrive as pilgrims.
Nov 18, 2018 10:14 (IST)
Meanwhile, Kerala BJP President PS Sreedharan Pillai claimed that the state was under "jungle raj". "Chief Minister Pinarayi Vijayan is arrogant and was behaving in an irrational manner. The present impasse in the state over the Sabarimala issue is his creation. We will strongly resist," Mr Pillai was quoted by news agency IANS.
Nov 18, 2018 10:01 (IST)
After spending the night at Chittar police station, BJP state general secretary K Surendran was produced before a magistrate near Pathanamthitta today morning which remanded him to a 14-day judicial custody. He is currently at the Kottarakara sub-jail. "The police have charged me uunder non-bailable sections. I am no criminal, nor do I have any cases against me. They did not let me sleep, nor was I allowed water or to take my medicines," news agency IANS quoted Mr Surendran. 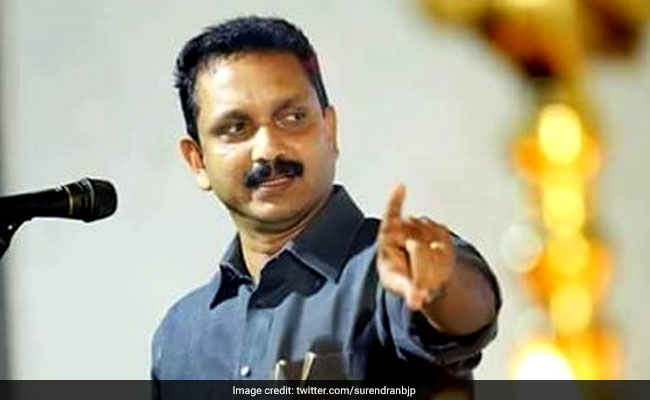 Nov 18, 2018 09:36 (IST)
K Surendran was asked by Superintendent of Police Yatish Chandra not to proceed towards Sabarimala but he did not heed. They were then taken into a 14-day preventive custody and brought to Chittar Police Station yesterday night.
Nov 18, 2018 09:09 (IST)
BJP state general secretary K Surendran has been remanded to a 14-day judicial custody. Police arrested Mr Surendran under Section 353 of the Indian Penal Code for obstructing public official's duty.
Nov 18, 2018 08:59 (IST)
At least 500 women in the 10-50 years age group have registered themselves for the darshan this time. However, Pathnamthitta District Collector PB Nooh said no woman in the 10-50 age group has so far approached the local administration seeking protection to visit Sabarimala.
Nov 18, 2018 08:47 (IST)
Since the historic court order, no woman of menstrual has been able to enter the hilltop shrine because of massive protests by the devotees who believe changing the tradition would be an insult to Lord Ayyappa. More than a dozen women tried and failed to make it to the temple, even with heavy police protection. Over 3,700 people have been arrested during protests across the state.
Nov 18, 2018 08:25 (IST)
VV Rajesh, a BJP leader who has been camping at the Sabarimala shrine since Friday noon, has blamed the government for creating an "unhealthy situation". "Till up to last year, the police would not use batons on protesters. This year, however, the police have been asked to bring sticks and batons. The government and the police are trying to instill fear among devotees," he said.
Nov 18, 2018 08:24 (IST)
Late on Saturday night, KP Sasikala, state president of Hindu Aikya Vedi, was taken into "preventive custody" when she was about two kilometres from the 18 steps -- the golden steps -- that lead to the sanctum sanctorum of the famous shrine. The group then called for a dawn-to-dusk shutdown in the state, which was largely peaceful.