NASA's images show the stark difference between the state before the flood and after the natural calamity stuck. 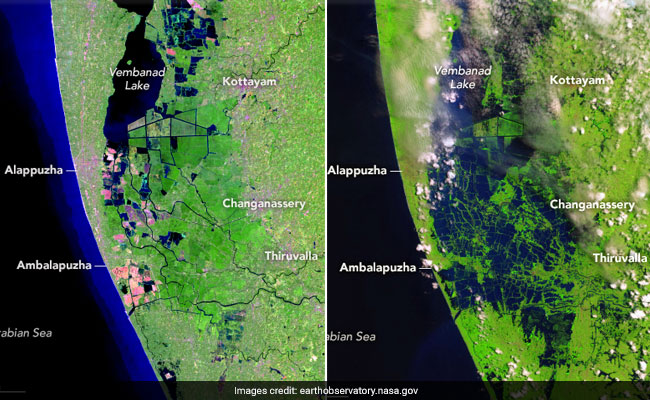 As Kerala rebuilds itself from its once in a century flood, NASA shared before and after images of the massive destruction the southern state faced since late July this year. The stain of death and devastation wrought by the flood will take longer than a season to wash away. NASA's images show the stark difference between the state before the flood and after the natural calamity stuck.

The Operational Land Imager (OLI) on the Landsat 8 satellite acquired the left image on February 6, 2018, before the flood. The Multispectral Instrument on the European Space Agency's Sentinel-2 satellite acquired the right image on August 22, 2018, after flood water had inundated the area. The images are false-colour, which makes flood water appear dark blue. Vegetation is bright green.

NASA also released an image of the amount of total rainfall on the country and south-east Asia and said Kerala's August rain played a part massive flooding, although it was worsened when water was released from several full dams. Instead of gradually releasing water during drier times, authorities were forced to open 80 dams in the region, including the Idukki Dam, which is one of the largest arch dams in Asia. Thirty-five of those dams were opened for the first time.

"The dam releases came way too late, and it coincided with the heavy rain that was occurring," said Sujay Kumar, research scientist at NASA's Goddard Space Flight Center.

People are in despair in the state which has rendered over 400 dead and a million homeless. The people have taken shelter in relief camps for now.

Houses in low-lying areas are still submerged, roads are waterlogged and the sewage from drains have washed into channels that are too slow-moving to effectively flush out the effluent.