The party's topmost post was lying vacant in the southern state after his predecessor Sreedharan Pillai was appointed Mizoram Governor in October 2019. 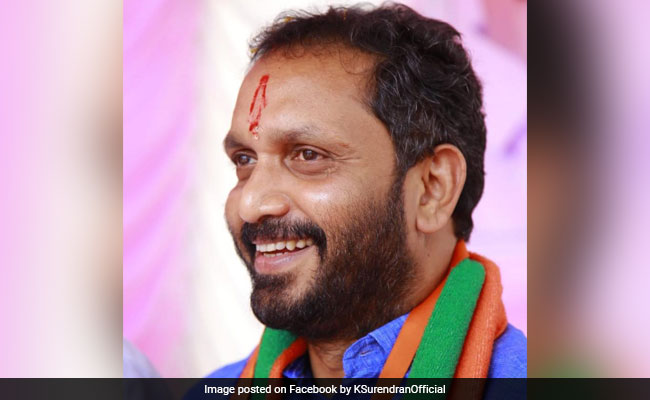 After a gap of over three months Kunnummel Surendran has been appointed as BJP's Kerala unit president.

The party's topmost post was lying vacant in the southern state after his predecessor Sreedharan Pillai was appointed Mizoram Governor in October 2019.

Mr Surendran's appointment comes at a time when Kerala is gearing up for the local body election this year and the assembly polls in 2021. BJP president JP Nadda today appointed Mr Surendran
as the party's Kerala unit chief.

The face of the party's fierce agitation against entry of young women in Sabarimala, Mr Surendran had been a front-runner for the presidentship since the beginning.

A close confidant of union minister V Muraleedharan, the 50-year-old leader has a tough task ahead of him to gain seats and increase the party vote share in the impending polls.

Presently a state general secretary, Mr Surendran had undergone 22 days of imprisonment during the height of the BJP and right wing outfits-led Sabarimala Lord Ayyappa temple protests against entry of young women into the shrine.

Talking to reporters, he said he would take the opportunity to lead the party and will effectively fulfill the duty that has been entrusted to him by the party's national leadership.

Hailing from Ulleyeri in Kozhikode, Mr Surendran had contested unsuccessfully from Pathnamthitta in the Lok Sabha polls held last year. Six months later, he was fielded from Konni in the assembly bypoll, which also he lost. He was defeated in the 2016 assembly polls by a meager 89 votes from the Manjeswaram constituency.