Heckled By Protesters At Sabarimala, Woman Passes Out After Panic Attack

Since the shrine to Lord Ayyappa opened on Wednesday, no woman has been able to reach the temple gates. So far, eight women have attempted the 5-km trek

Sabarimala temple: The police took the woman to hospital from the base camp Pamba

A woman suffered from panic attack and had to be taken to a hospital near Sabarimala after masses of protesters surrounded and heckled her. Earlier today, two women had to turn back after facing similar treatment from groups that have been camping on way to the hill shrine, determined not to let any woman of reproductive age set foot there.

Balamma, 47, had trekked almost 4 km without police protection, unnoticed by anyone. Then, in absolute disregard for the Supreme Court ruling, the protesters surrounded her and checked her ID card for age. The protesters were not stopped by police.She fell unconscious and had to be taken to a hospital in Pamba, the police said.

Since the temple opened on Wednesday - the first time after the top court's ruling - no woman has been able to reach the temple gates. So far, eight women have attempted the nearly 19 km trek. None have gone beyond Nilakkal and Pamba - two main stops on way to the shrine. Two of them, Kavitha, a journalist, and Rahana, an activist, were stopped near the shrine's main entrance, a few hundred metres from the sanctum sanctorum.

The temple, which remains open only five days a month, will shut tomorrow.

From Day 1, protesters have made their determination clear, stopping buses, harassing women and attacking reporters and media vehicles in presence of the police force. Despite the state government's assurance that law and order will be maintained, police presence has been largely ineffective, women say. 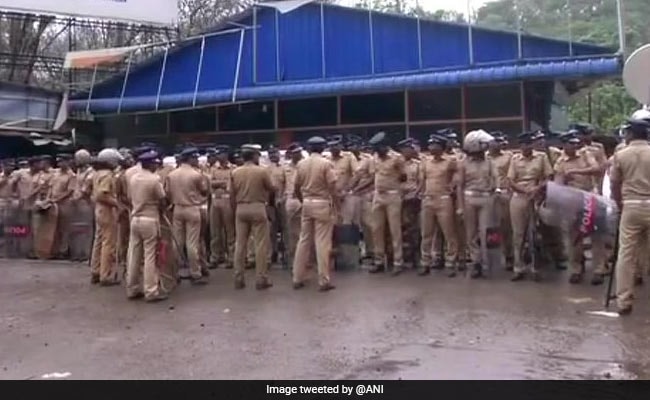 Since Wednesday, the police have tried to chase away the protesters a few times. But they have always returned and stationing themselves mainly at the base camps Nilakkal and Pamba managed to heckle and intimidate women into staying away.  They have even started checking the ID cards of women at Nilakkal base camp before allowing them to proceed.

The police say they will provide protection to the women devotees to reach the temple, but cannot help beyond that. "Darshan is something which can be done with consent of the priest," said Kerala Inspector General S Sreejith. On Friday, his team formed a protective ring around two women who wished to enter the temple, but they did not succeed.

In what is being considered as a failure of the state machinery and intelligence,  a group of protesting devotees have stationed themselves at Sannidhanam, minutes away from the final 18 steps leading to the temple. The police have not been able to stop this.

Earlier today, two women from Andhra Pradesh in their early forties were stopped 200 metres from Pamba.

Vasanthi, 41, and Aadhiseshi, 42, minutes after they started climbing towards the hilltop shrine of Lord Ayyappa, protesters surrounded them and forced them to go back. They said they did not know about the situation in Sabarimala, and have decided to return home.