Sabarimala temple: Vasanthi, 41, and Aadhiseshi, 42, said the protesters surrounded them on their way to Lord Ayyappa shrine and forced them to return to the base camp Pamba

Kerala's Sabarimala temple will close tomorrow for the month; no women below 50 entered the temple

Two women from Andhra Pradesh in their early forties who started walking towards the Sabarimala temple today were stopped by protesters 200 metres from the base camp Pamba. Vasanthi, 41, and Aadhiseshi, 42, said the protesters surrounded them, blocked their way and forced them to return to the base camp, minutes after they started climbing towards the hilltop shrine of Lord Ayyappa in the Western Ghats. A third woman from Andhra Pradesh who walked alone for almost 4 km was heckled by protesters. Balamma, 47, suffered a panic attack and had to be taken to a hospital.

Only nine women below 50 have tried to walk to the temple since Wednesday when it opened after the Supreme Court last month overturned a centuries-old ban on women between 10 and 50 years entering Sabarimala. Not a single woman has managed to reach the hilltop shrine.

The two women from Andhra Pradesh who turned up at Pamba this morning are part of a pilgrim group going to temples across Kerala. They said they did not know about the situation in Sabarimala, and have decided to return home. The police took their statement and escorted them out of the base camp.

Yesterday, a 38-year-old woman from Kerala dropped her plan of attempting the 5-km uphill climb to the temple due to heavy rain in the hills, even as protesters lay in wait to stop them from reaching the 18 golden steps that lead to the shrine of Lord Ayyappa.

The police have said they will give all the protection women devotees need to reach the temple without fear. "... But darshan is something which can be done with consent of the priest. We will give them whatever protection they want," said Kerala Inspector General S Sreejith, who on Friday led a police team that formed a protective ring around two women whose attempt to enter the temple did not succeed. 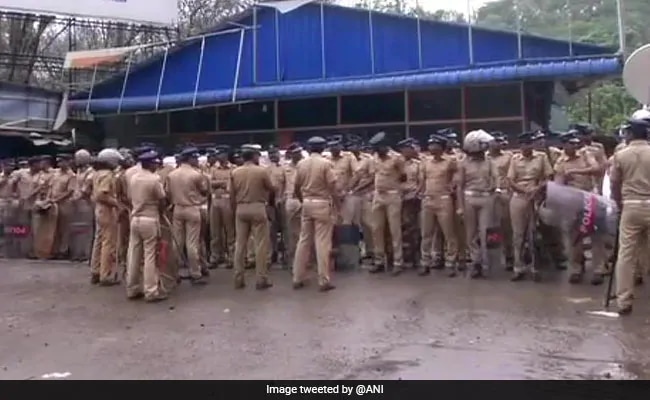 Manju, who came to the base camp yesterday, is general secretary of the Kerala Dalit Mahila Federation. She has asked for police protection, but the police said a decision on giving her security for today depends on a background check. She has a few cases against her and alleged links to a radical organisation, people with direct knowledge of the matter said.

Yesterday afternoon, high drama unfolded outside the temple when a woman from Tamil Nadu was stopped from entering the compound by devotees who thought she was under 50. They let her walk up the 18 golden steps that lead to the shrine of Lord Ayyappa only after checking her identity paper with her date of birth mentioned on it.