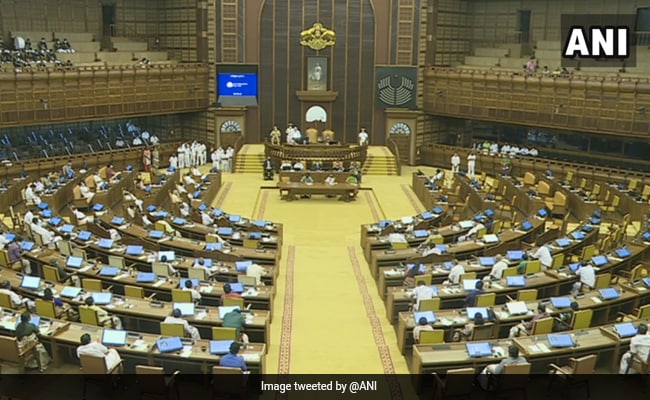 VD Satheesan would be the leader of opposition in the 15th Kerala Assembly. (File photo)

The first session of the 15th Kerala Legislative Assembly will commence on May 24, three days after the second Pinarayi Vijayan government was sworn in at the Central Stadium in Thiruvananthapuram.

The session, to be held under strict COVID-19 protocols, would extend up to June 14, government sources said.

The new MLAs would be sworn in on May 24, the first day of the session, and Kunnamangalam MLA, PTA Rahim, who was appointed as the pro-term speaker recently, would administer them the oath.

The election of the new speaker of the 140-member-strong Assembly would be held on May 25.

The ruling LDF has already announced Thrithala legislator, M B Rajesh as its speaker candidate.

However, the opposition Congress is yet to declare its nominee.

Governor Arif Mohammed Khan would present the customary policy address of theVijayan government on May 28 while Finance MInister K N Balagopal would come out with the revised budget of 2021-22 and vote on account on June 4.

The 15th Kerala Assembly has its peculiar features in many ways as it is for the first time in the last four decades that the House is going to witness a government and chief minister for the second consecutive term.

On the opposition side, a generational shift would be witnessed as vibrant leader VD Satheesan would replace senior leader Ramesh Chennithala in leading the Congress Legislative Party in the House.

The 14th Kerala Assembly had seen Mr Chennithala as the opposition leader. The war of words between Vijayan and the Congress leader over various issues had been an usual scene in the House throughout these five years.

For the first time in its history, the Assembly would also witness a father-in-law and son-in-law together in the House.

Besides the Chief Minister and ministers K Krishnan Kutty (JD-S) and A K Saseendran (NCP), all the other 18 ministers are fresh faces this time.

KK Rema, wife of RMP leader T P Chandrasekharan and a critic of the Chief Minister, would also be a striking presence in the House this time.

She represents Vadakara constituency in the state assembly.

The assembly secretary has issued detailed guidelines to ensure the strict compliance of the COVID protocol in the campus.

Visitors' passes would not be issued this time considering the pandemic spread.

Arrangements have also been made for the legislators, journalists and other office staff to undergo antigen tests on the assembly campus, official sources added.

Kerala MLAs Sworn In As First Session Of Assembly Begins