"The minor fire was at the political section of the General Administration Department. No one has been injured," officials said.

A fire at the Kerala secretariat in Thiruvananthapuram caused a huge commotion on Tuesday evening. The fire, described as minor, spurred opposition protests and allegations of a link to the gold smuggling case.

Visuals showed officers trying to salvage files and equipment from the building, which has offices of the state government.

Smoke was seen rising from windows of the second floor of a block at the secretariat.

"The minor fire was at the political section of the General Administration Department. No one has been injured," a police official on duty said. 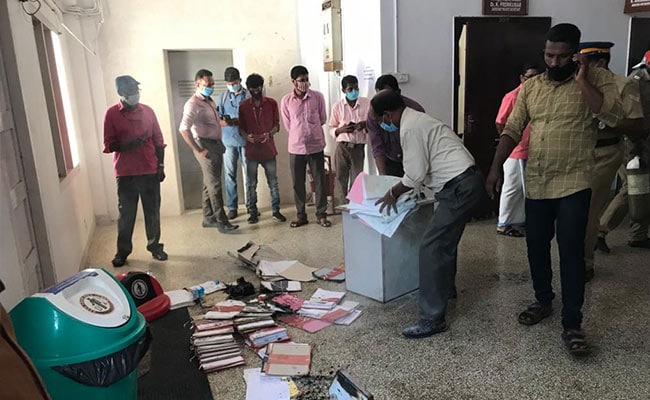 The opposition Congress-led UDF in the state has alleged attempts to sabotage the investigations into the gold smuggling case. Opposition Leader Ramesh Chennithala and other congress leaders met the Kerala Governor Arif Mohammad Khan today and demanded an independent probe into the incident.

"This has been done in an attempt to destroy files and sabotage the gold smuggling probe," said Congress leader Ramesh Chennithala. He and other Congress leaders protested outside the secretariat for some time until they were allowed to enter. Members of the BJP also protested.

BJP leaders, including state chief K Surendran, were arrested and removed from the secretariat premises.

Chief Secretary Vishwas Mehta told reporters that no crucial file had been destroyed and there would be a detailed investigation. Another senior official said the files that were damaged in the fire were on guest house bookings.

An IAS officer, M Sivasankar, was removed as Principal Secretary in the Chief Minister's Office and suspended over alleged links with an accused in the case involving 30 kg of gold being smuggled into Thiruvananthapuram airport from Dubai through the diplomatic channel in July.