Amid Kerala Rescue Efforts, An Imposter, Fake Video And Warning By Army

The floods in Kerala started after the authorities were forced to release water from 35 dams after the state received 250 per cent more rain than normal between August 8 and 15. 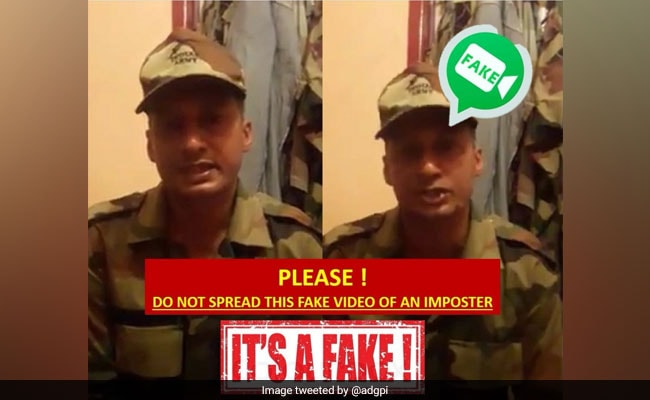 Kerala floods: The Army said the video is fake and shows an imposter.

An imposter in army uniform has been spreading "misinformation" over the rescue and relief efforts in Kerala, the army said today. The video in which the man is seen accusing the state government of not allowing the army to do is job, has been widely shared  on social media.

In a tweet, the army warned that it was a fake video and called for help to control the situation. "Do not spread this fake video of an imposter," they tweeted, the words superimposed over the photo of a man wearing combat fatigues.

The savage monsoon in Kerala -- the worst in a Century -- had triggered a huge human tragedy, killing more than 300 people and forcing nearly a million people to leave their homes and live in relief camps.

Many of them have lost their homes and all possessions.
The armed forces have been working on a war footing to help the people, working round-the-clock shoulder to shoulder with the National Disaster Response Force, private groups and local fishermen to counter the tragedy.

Over the last days, they have rescued thousands marooned on rooftops, surrounded by floodwaters. Using choppers to reach the people, they have winched up pregnant women, babies and senior citizens and taken them to safe areas.

Though flood waters have started receding in some areas, more than a thousand people in the state are still trapped in villages around Ernakulam, one of the worst-hit districts.

The weather has finally turned in Kerala, with a few areas not having any rain in the last 24 hours. One of these is Thissur, where people displaced by the floods have started returning home.

The floods started after the authorities were forced to release water from 35 dams after the state received 250 per cent more rain than normal between August 8 and 15.