Karnataka Chief Minister HD Kumaraswamy informed about the special investigative team's (SIT) action, claiming a BJP lawmaker were present with the leader on a chartered flight.

Suspended Congress leader Roshan Baig was released today after several hours of questioning since being detained on Monday night at the Bengaluru airport in connection with the multi-crore IMA Ponzi scam. Karnataka Chief Minister HD Kumaraswamy informed about the special investigation team's (SIT) action on Twitter, claiming a BJP legislator was present with Mr Baig on a chartered plane. He alleged the legislator's presence proved the party's involvement in destabilising the Congress-Janata Dal Secular government.

"Today SIT probing the IMA case detained Roshan Baig for questioning at the BIAL airport while he was trying to leave along with BS Yeddyurappa's PA Santhosh on a chartered flight to Mumbai. I was told that on seeing the SIT, Santhosh ran away while the team apprehended Mr Baig," Mr Kumaraswamy tweeted.

"BJP MLA Yogeshwar was present at the time there. It's a shame that the BJP is helping a former minister escape, who is facing a probe in the IMA case. This clearly shows BJP's direct involvement in destabilising the government through horse trading," he added.

Sixteen Congress-JDS lawmakers have resigned and two independents have withdrawn support from the government, plunging the teetering coalition into a crisis. After they resigned, the lawmakers 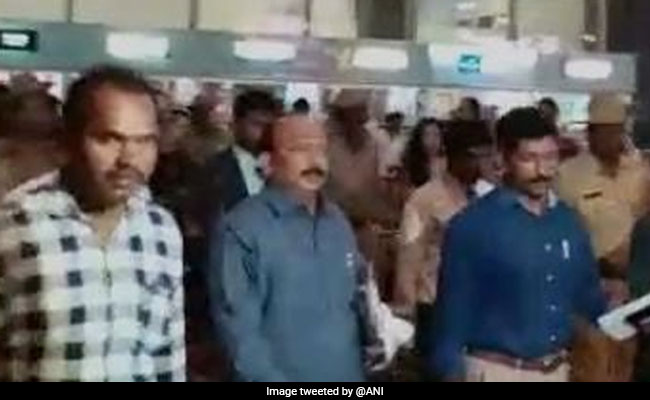 The lawmakers, whose resignation not been accepted by the Speaker KR Ramesh Kumar, are staying at a hotel in Mumbai.

Ten rebel lawmakers had approached the Supreme Court last week, which had ordered Mr Kumar to maintain status quo on the resignations till Tuesday. Five more lawmakers went to the court on Saturday. All their applications will be heard today.

The coalition will take a floor test on Thursday.

BJP MLA Yogeshwar was present at the time there.Its a shame that @BJP4Karnataka is helping a former minister escape, who is facing a probe in the #IMA case. This clearly shows #BJP' s direct involvement in destabilizing the govt through horse trading.2/2@INCIndia@INCKarnataka

The BJP reacted to Mr Kumaraswamy's charge, alleging he was using the state machinery to save his government.

"CM HD Kumaraswamy is using the state machinery to save his government now. Roshan Baig was given time till 19th July to appear before SIT. This shows how the state government is blackmailing and treating their own MLAs using the institutions," the party's state unit tweeted.

It is false that @BSYBJP's PA Santhosh was travelling along with Mr. Baig.

CM is peddling fake news & misleading the state. It was only Mr. Baig who was travelling & their was no 2nd passenger.

We demand to check boarding passes & CCTV footage to put out the facts.

The SIT's action came on a day when Mohammed Mansoor Khan, the main accused in the scam, said he will return to India within 24 hours.

In the video message on Monday, he said: "God willing, I will return to India in the next 24 hours, I have full faith in the Indian judiciary. First of all, leaving India was a big mistake, but circumstances were such that I had to leave. I don't even know where my family is".

Thousands of complaints have been filed against IMA Jewels so far by investors who had hoped for good returns under terms prescribed by Islamic law, but instead ended up losing their money.

The main accused had allegedly escaped to a foreign location last month, leaving behind just an audio message claiming that he was going to commit suicide. He had also alleged Mr Baig's involvement.