The state Congress initially tried to cover up the incident, but that became impossible after photographs of the injured legislator emerged and a formal complaint was filed. 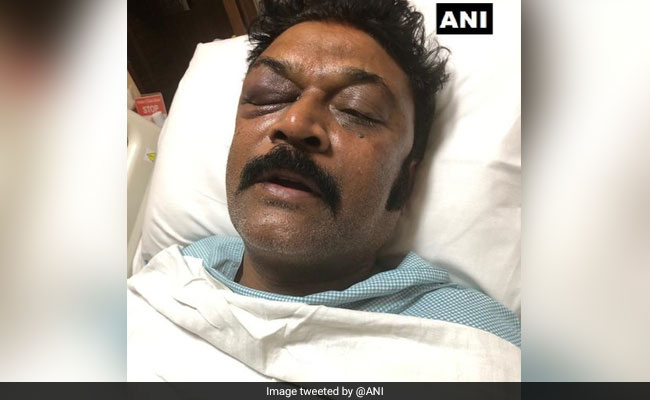 Vijayanagara MLA Anand Singh was badly injured in the incident.

The Karnataka Police has launched a search for Kampli Congress lawmaker JN Ganesh for allegedly attacking a fellow party legislator at a resort on the outskirts of Bengaluru on Saturday night. The brawl took place at a time when the Congress was keeping its legislators cocooned away for fear of the opposition BJP trying to lure them away.

The victim, Anand Singh, is still being treated in a hospital. He has alleged that Mr Ganesh attacked him at the Eagleton Resort with the intention to kill.

Although the state Congress initially tried to cover up the incident, even denying that any such brawl took place, that became impossible after photographs of the injured legislator emerged and a formal complaint was filed. Mr Ganesh was suspended by the party, and Karnataka Chief Minister HD Kumaraswamy assured that he will be arrested soon.

"The police have registered an FIR based on Anand Singh's complaint. They have launched a search for Ganesh. Karnataka Pradesh Congress Committee president Dinesh Gundu Rao has formed a three-member committee headed by me to investigate the incident, identify those involved and file a report," Deputy Chief Minister G Parameshwara told mediapersons on Thursday.

In an interaction with the media soon after the incident, Mr Ganesh refrained from admitting to Anand Singh's charges but said that he was willing to apologise to his family if he has caused them any distress. Later, he claimed on social media that he had not injured his fellow-legislator.

Anand Singh, who represents Vijayanagara in the state assembly, had quit the BJP to join the Congress last year.

Meanwhile, Umesh Jadhav -- one is the four legislators who had skipped the Congress legislature party meeting on Friday -- has returned to his constituency. He cited ill-health for his absence.