PayCM Campaign: PayCM is an aggressive campaign launched by Congress against the Basavaraj Bommai government, accusing it of massive corruption. 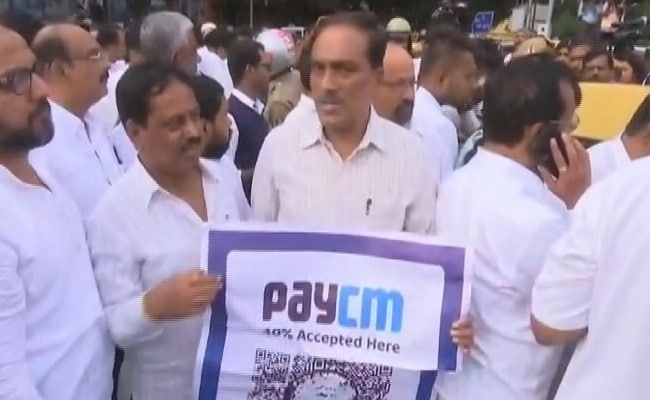 Karnataka Congress chief DK Shivakumar dared the state government today to act against him and former CM Siddaramaiah for wearing the "PayCM" t-shirt, alleging that several party workers were booked for wearing the same t-shirt during the 'Bharat Jodo Yatra'.

"The Leader of the Opposition in the Legislative Assembly Siddaramaiah and I and other leaders will participate in Bharat Jodo Yatra by wearing 'PayCM' t-shirts. Let's see what the BJP will do," Mr Shivakumar told reports in Nanjangud.

He said cases had been filed against some Congress workers for wearing t-shirts with "Pay-CM" written on them during the march in Gundlupet.

On Saturday, a Congress worker was made to take off his t-shirt that featured the "PayCM" poster during the Bharat Jodo Yatra and an FIR has also been registered against him at the Chamarajanagar police station.

"PayCM" is an aggressive campaign launched by Congress against the Basavaraj Bommai government, accusing it of massive corruption. The PayCM campaign appears to have started on September 21, when posters featuring CM Bommai surfaced in Bengaluru. These posters had a QR code with the message "40 per cent accepted here".

Once scanned, the QR code would take people to a parody "40 per cent Commission Government" website launched recently by Congress. If any, people would then be asked to file their complaints against the chief minister.

The government has dismissed the Congress charges as politically motivated.

"The government is sunk in 40% commission. All sections including farmers are suffering. On the one hand, there is corruption and unrest, on the other hand, there is the problem of farmers and unemployment. An atmosphere of fear has been created among the people," Mr Shivakumar alleged.

The Karnataka Pradesh Congress Committee chief accused the BJP of slander and baseless criticism because "our development is unbearable" to it. "BJP is doing petty politics to divert people's attention. They are criticizing us even though it has dead rats on its plate".

Speaking about the yatra, Mr Shivakumar said it is "not a party programme but a people's programme that connects minds".

"We are trying to find answers to problems and give courage to worried people," he added.