No One Can Make Stable Government In These Circumstances: HD Kumaraswamy

HD Kumaraswamy said none can assume that the government in Karnataka will remain stable as resignations by rebel MLAs of the Congress-Janata Dal Secular coalition pushed the state towards by-elections. 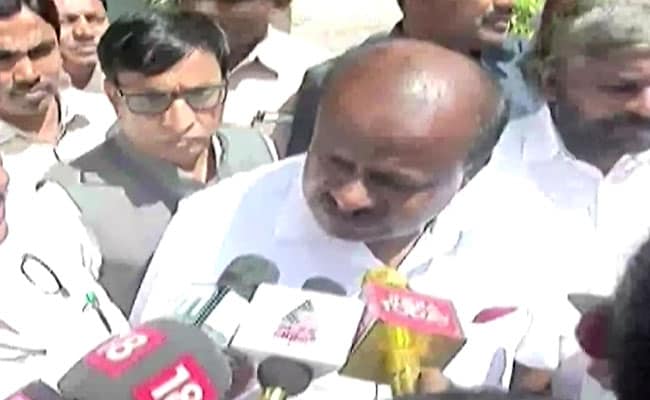 Karnataka caretaker Chief Minister H D Kumaraswamy said on Thursday that no one can give a stable government in the state in the present political scene after the fall of his ministry two days ago.

Mr Kumaraswamy said the resignations by the rebel MLAs of the Congress-Janata Dal Secular coalition had pushed the state towards by-elections.

"We cannot assume that the government will remain stable even after the elections," Mr Kumaraswamy told reporters.

The HD Kumaraswamy-government was reduced to a minority in the critical trial of strength in the assembly on July 23, when the confidence motion moved by him was defeated with 99 voting in favour of it and 105 against, ending a three-week long high-voltage political drama.

Mr Kumaraswamy, who was speaking to reporters after meeting senior Congress MLA Ramalinga Reddy, said he expressed his gratitude to him for having withdrawn his resignation to support the coalition government.

He said Ramalinga Reddy has shown his commitment to the Congress. Mr Reddy was among the 16 coalition legislators who had resigned their assembly membership, but he later retraced his step and voted for the government.

Treading cautiously, the BJP is yet to stake claim to form the government as the final word on the number game has not been said yet with the Assembly Speaker K R Ramesh Kumar still to decide on both the resignations of the rebels and pleas for their disqualification.