JD(S) Contesting From Tumakuru Will Not Reduce Our Hold: Congress Leader 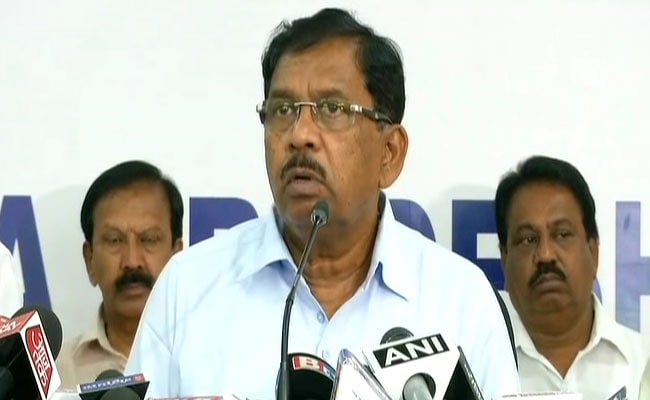 "Our ultimate goal is to see Rahul Gandhi becoming the prime minister of India," he said.

Deputy Chief Minister G Parameshwara has said the Congress' decision to give the Tumakuru Lok Sabha seat to coalition partner JDS will not reduce the party's hold in the constituency and that their ultimate goal is to see Rahul Gandhi becoming prime minister.

Former prime minister and JDS chief HD Deve Gowda will take on former parliamentarian GS Basavaraju in Tumakuru, which has changed hands between the Congress and the BJP in the past.

"The decision to allot the Tumakuru constituency to Deve Gowda will not cut down the Congress' hold there. Our ultimate goal is to see Rahul Gandhi becoming the prime minister of India," Parameshwara told PTI in an interview on the sidelines of an election campaign event at Kolala village here.    Even Deve Gowda has expressed his desire to see Gandhi as prime minister, he added.

"There is a saying in English. It goes something like this - 'one has to accept defeat so that you don't break later' (sic). Therefore, I and my party decided not to field a candidate from Tumakuru," he said.

G Parameshwara and other local Congress leaders were earlier upset over the seat being denied to sitting MP Muddahanume Gowda.

The deputy chief minister had to take a lot of heat from the Tumkuru District Congress Committee for his inability to keep the seat for the party, while chairman of the coordination committee Siddaramaiah was successful in denying the Mysuru seat to the JDS despite pressure by the coalition partner. Muddahanume Gowda acknowledged that there was quite a ripple initially when the seat was given to the JDS, but after meeting Gandhi and the central leadership, he withdrew his nomination as an independent candidate.

"I met Rahul Gandhi and other leaders in Delhi. (Rahul) Gandhi told me to withdraw my nomination as a rebel candidate from Tumakuru constituency. The scion told me 'you have to do that for India and its security and well being'. I immediately decided to withdraw and started helping Deve Gowda," he said. The joint campaign trail of the coalition partners has witnessed tremendous response from people, Muddahanume Gowda said.

"Having 30 years of political experience, I personally feel we are going to win this seat easily because the failure of Prime Minister Narendra Modi has percolated down to common people and villagers," he added. The political pundits, however, say there's a tough battle on the cards for Deve Gowda as he is contesting from a Congress bastion amid disquiet in both his party and ally Congress over allocation of seats and tickets.

They, however, do acknowledge the former prime minister's potential to bounce back as he did by winning the Kanakapura by-election in 2002, after he had lost to G Puttaswamy Gowda of the Congress in 1999 from Hassan.

Candidates of the Congress and the BJP have won ten and four times from the same constituency. It was a Congress stronghold from 1952 to 1989, till the party lost ground to the BJP.

G S Basavaraj is the BJP candidate. He won the seat thrice on a Congress ticket and once as a BJP nominee. He was defeated by Muddahanume Gowda in 2014 elections.

The Vokkaliga leader has fielded his grandsons Nikhil K and Prajwal Revanna from Mandya and Hassan respectively. This has apparently left some of the senior JDS leaders, who were hopeful of getting tickets, unhappy.

Tumakuru district comes under the Old Mysore region. The JDS has not won an MP seat from there, but C N Bhaskarappa had won in 1996 as undivided Janata Dal candidate.