State youth president is Nikhil Kumaraswamy, who was defeated by BJP backed Independent, Sumalatha Ambareesh, in the Lok Sabha election. He is the son of Chief Minister HD Kumaraswamy, who is currently in the US on a private visit.

HD Kumaraswamy's Janata Dal Secular -- part of the ruling coalition in Karnataka along with the Congress - has rejigged its party office bearers following its poor show in the Lok Sabha elections in the state.

The role of the state's working president has been taken over by Madhu Bangarappa. The son of the late former chief minister, S Bangarappa, Madhu Bangarappa was defeated by BS Yeddyurappa's son, Raghavendra, in the recent Lok Sabha election.

The party's state youth president is Nikhil Kumaraswamy, who was defeated by BJP-backed Independent, Sumalatha Ambareesh, in the Lok Sabha election. He is the son of Chief Minister HD Kumaraswamy, who is currently in the US on a private visit. 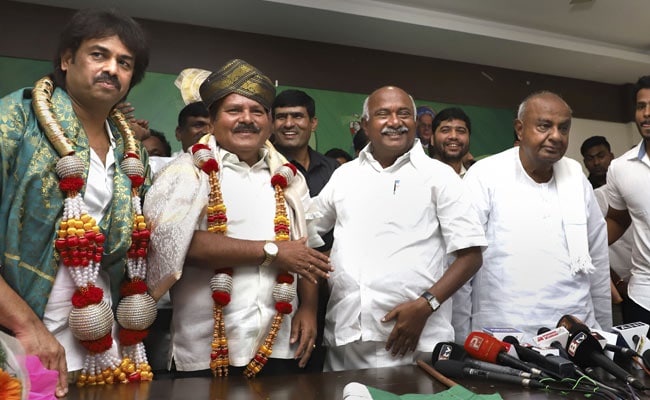 The announcements were made by Nikhil's grandfather, former Prime Minister, HD Deve Gowda.

The JDS has often been criticised for family-based politics.

Tickets to contest the Lok Sabha elections were given to two grandsons of Deve Gowda - Nikhil Kumaraswamy and his cousin Prajwal Revanna, the son of HD Revanna, Mr Kumaraswamy's brother and a minister in the state cabinet.

Mr Deve Gowda and Nikhil Kumaraswamy both lost the seats they contested. Prajwal Revanna is the party's only lawmaker in parliament.

The Congress too could win only one of the state's 26 Lok Sabha seats. The rest were scooped up by the BJP, led by former Chief Minister BS Yeddyurappa.

The loss came as a shock to the ruling coalition, which had joined forces after the assembly elections last year in May to keep the BJP out of power.