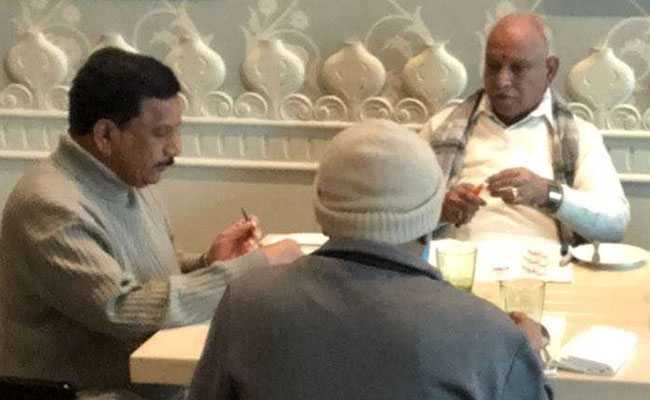 The BJP lawmakers were staying at a luxury resort in Gurgaon

Karnataka BJP MLAs have returned to the state from Gurgaon where they were lodged in a private resort for the past few days.

"Some of them have directly flown back to their constituencies and others including former deputy chief ministers R Ashoka and K S Eshwarappa returned to Bengaluru," he said.

With the Congress on tenterhooks to keep its numbers intact, the party's MLAs are remaining sequestered in a resort on the city outskirts fearing a poaching bid by the BJP.

Mr Yeddyurappa had said the BJP would not destabilise Karnataka's ruling coalition.

"Let the Congress-JD(S) leaders not have any doubt about it," he said, after chinks in the ruling coalition were exposed when four MLAs skipped the Congress Legislature Party meet on Friday.

As the fissures became evident, the Congress on Friday swiftly moved all its MLAs to the resort in a bid to "escape" the BJP's alleged bid to woo its MLAs.

Top Congress sources had said on Friday that at least eight party MLAs have "committed" themselves to BJP. The BJP also announced that a seven-member team led by mr Yeddyurappa would tour drought-hit districts from Monday.

Former Karnataka chief minister and Congress leader Siddaramaiah had welcomed BS Yeddyurappa's decision to call back all BJP MLAs and asked him to "walk the talk" on not trying to destabilise the ruling coalition.

"I welcome Yeddyurappa's decision to call back the BJP legislators from Delhi and send them to monitor the drought management in the state," he said in a tweet.

Congress minister D K Shivakumar said he was in touch with all the MLAs.

Asked about senior ministers resigning to accommodate disgruntled legislators in the cabinet, he said, "I have voluntarily offered (to resign)...in the interest of the party. If my leaders want, I'm ready."